In conversation with editor Gail Ingram

Gail Ingram: Kia ora Rose. Lovely to kōrero with you about your new debut poetry collection My Thoughts Are All of Swimming, which won the inaugural John O’Connor Award. Kā mihinui and congratulations! Tell us about the John O’Connor Award. Who is John O’Connor, who is the award for, and how did it come into being? How did you react when you’d heard you’d won? 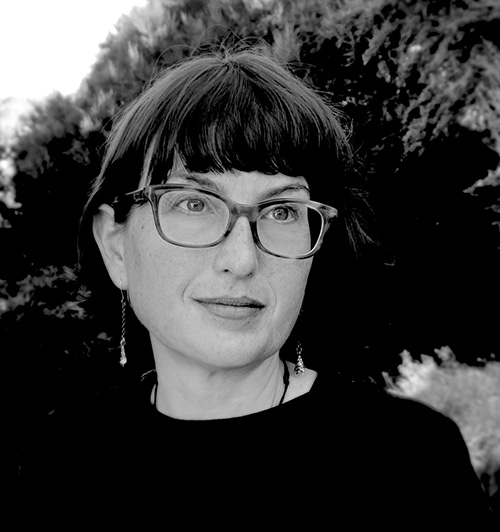 Rose Collins: Thanks so much Gail. It’s so lovely to kōrero with you too.

When I got the news that I had won the JO’C Award I was at home cooking dinner and I was so beside myself with the joy and the shock of it that I couldn’t stop crying!! I think I gave my family a bit of a fright.

John O’Connor was a well-known Ōtautahi poet and editor who died much too soon, in 2015. I feel sad that I never got to meet John – people keep telling me what a force of nature he was. I hear he was generous and supportive of new writers and I know from reading his work that he had a particular gift for haiku. John was also the co-founder of Sudden Valley Press, so the award, established by SVP and the Canterbury Poets Collective, is a great tribute to him. The JO’C Award is only open to poets who haven’t yet published a collection and the prize includes publication with SVP, so it’s an amazing leg-up for an emerging poet.

GI: You open the book with the wonderfully evocative and terrifying line ‘I am the crater of ghosts’, speaking as the caldera of Te Whakaraupō. Both Michael Harlow and Lynn Davidson speak of the darkness underlying the music or wonder in your poems. Where does this darkness come from? And the wonder, the hope?

RC: It’s so fascinating when you put work out there and allow people to read it and then get to hear what’s resonating for them. I love what both Lynn and Michael have said about my work – I think the poems do sort of play along that edge, the liminal zone between menace and hope. I don’t set out to write ‘dark’ poems at all (and I often wish I could write funny ones!) but I can see how the journey I’ve been on for the last few years as my whānau and I have navigated my cancer treatment has involved a lot of upheaval, sorrow, displacement, transformation as well as deep solace in nature and family and a whole lot of hope. All of that can be found in these poems, but I’m a storyteller so I hope that it has mostly come out slantwise, by using one story to tell another or by tapping into fairytale and myth. I’m still a fiction writer at heart.

GI: You capture other contradictions too, moving from what Elizabeth Smither called the ‘wide-lensed beginning’ to the very particular ‘crumbs’ and ‘floury sand on the floorboards’,  and across continents and time. Tell us about your process. What do you like to do in your poems? Do you set out to encompass the universal in the particular, and how? Do you write thematically or structurally? And how did you go about bringing these wide-ranging poems together into a collection?

RC: I think I’m just quite intuitive in terms of how I approach my writing. I don’t tend to be much of a planner, in life or in writing. I’m always amazed when I hear writers talking about how they strategise characters, plot or structure and make extensive use of walls full of post-it notes etc. For me the initial process of writing, whether it’s prose or poetry, is all pretty free-form and mysterious. I’m essentially following my nose, focussing mostly on the particular without giving a lot of conscious thought to the universal. The editing process is a different story. When I’m teaching kids or teenagers, I try to encourage them to approach things this way – to keep the judgey editorial voice out of the way at least until you’ve got something down on the page to play with.

Pulling together the collection was a really interesting process. I began by printing out everything that might find a place in the manuscript. From there it was all about sifting and re-arranging to get a sense of which pieces were speaking to each other and how the sequence might be constructed. You’re right that the poems are wide-ranging – some are from my time living New York, some are about travels in Europe and living in Dublin, some are re-imaginings of historical events, many evoke the landscapes of my childhood, some are very personal to my family (I have ancestors who were killed in the Kaitangata Mining Disaster, for instance) and some are about more mundane domestic stuff like the struggles and delights of parenting. Still there are threads and echoes that link the poems. I hope when people read them together they will find their own linkages.

GI: At your over-flowing book launch at Tūranga in Ōtautahi, there was a panel discussion featuring publisher of Sudden Valley Press David Gregory, you and the award finalists, Jeni Curtis and Ciaran Fox, and emceed by the wonderful Erik Kennedy. Erik asked about the title ‘My Thoughts Are All of Swimming’. So why this title and how did you come up with it? And what was a favourite moment for you at the launch of your first book? 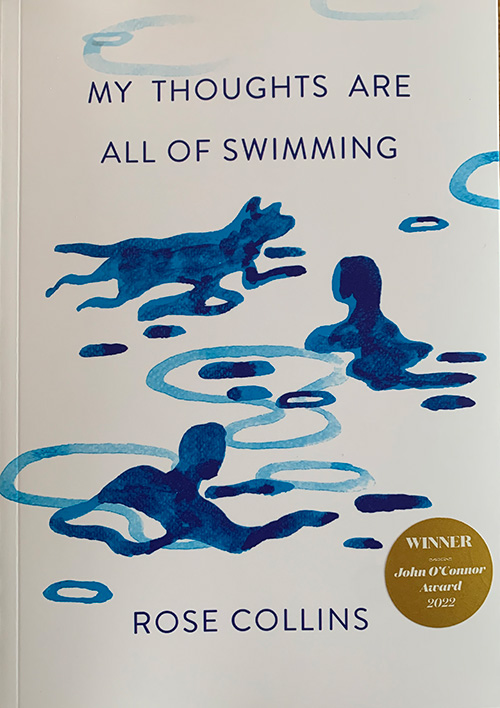 RC: We had so much fun launching the book and I can’t think of a better place to do it than at beautiful Tūranga. I was so nervous and adrenalised that night, and so grateful to have Ciaran and Jeni sharing the stage with me. I think my favourite moment was just as we began the discussion when I looked out at the audience (way more people than we had chairs for) and realised that the room was full of people I love, including so many Ōtautahi writers. Somehow that helped calm me down! Also, of course Erik’s deft and unflappable MCing helped too.

The title of the book comes from a poem by that name. It’s true that I think about swimming a lot – I’m a salt water person and the sea is my favourite place to be. The poem was written for my partner Pete not long after my cancer diagnosis. It is a love song of sorts.

GI: And the cover of your book was designed by your talented artist-partner Pete McDonald. I heard there’s a story here about working with family members. Tell us more!

RC: Ha! All I can say is that the phrase “most difficult client ever” may have got bandied around a bit… I guess I’m a worst-nightmare combination for a designer: someone who has very particular ideas about what they like but also doesn’t have a great grasp of the language necessary to articulate them. We got there in the end and I love the cover so much, especially because to me the dog swimming in the top left of the image is my much-missed sheepdog-cross Teddy, who took his job very seriously and never left my side, even during my sea swims.

GI: You have not only won awards for your poetry but also for your short fiction, winning the 2020 Micro Madness competition, among others. Which do you prefer – poetry or fiction? Do you set out to write one form or the other, or is it as you say in your poem ‘Teaching the Poets’ – “If I tell them [the students] to sit still the words appear – content or form or both together”?

RC: I can’t choose between them and I often don’t have a clear defining line. Some of the pieces in this book are prose poems or little flash fictions and many of the poems are ‘fictions’ in that they are about imagined characters or events. I sometimes worry that readers might think the poems are all autobiographical! My compulsion to make up stories doesn’t seem to leave me when I sit down and write a poem.

GI: How wonderful to have your first book in the world! What plans do you have next, or is it time for rest and recuperation?

RC: I’ve just had a very restorative two-week holiday with my extended whānau so I’m feeling ready to get back to work now! I want to focus on a longer-form fiction piece, but since I’m not a great planner who knows what might emerge.

GI: Tēnā koe for sharing your kupu with us, Rose.

Three poems from the book

My friend rang early –
his voice and guitar
through the speaker
like the roar of velcro –
‘Oh mist rolling in from the sea,’
he graunched, Muppet-gravelly

rain whites-out the road
breath blares on the windscreen

It seems unkind to make her write a poem
using a word both of us have only just learnt.

We may appear pedantic
‘All writing is in fact cut-ups’ !
we wander through the wildly overgrown
without lingering and still hear
those evening whispers:

The moon is sometimes just the moon
no one cares about shimmering
no one asked it to glow
did we request this luminosity?

There it is! Just there
still bleached and airborne even
in the cold tick of morning
on my way to teach the poets

Put this on the whiteboard:

The world will freely offer itself to you to be unmasked, it has no    choice, it will roll in ecstasy at your feet.

Write it down and then watch
the breathless dog in every pen
the wild strumming of black on to white.

‘The weeping of the women and children is a lamentable scene’

this cold is bottomless –

chill breath of thirty-four men waking in the dark –

seep & drag of boots, whip of air in the lungs

a boy leading a horse to the mouth of the mine

is thrown fifty yards out, his shadow

raw morning & we are flogged with the truth:
how much we take from each other.

Her stalk-ears are yoked to a bridal veil,
she covets grassy tracks that are yellow as grain, leaves
her young behind boulders,
says: ‘I didn’t realise this path was open again.’

At home, she nibbles sour dock, bark and rind,
her furred leverets are lit by the monitor’s glow,
in the comments field she types long, whiskery
put downs. She lacks restraint.

In her notebook, a snaffle of sentences,
a trace of small brown names.
A drove of jacks sprint past her.
She thinks: ‘I found a word in my pocket today.’

On her wedding day she is braced for rock-roll,
the sun salts shining tussock in her pelt.
She is running downhill – splitting the seams
of the Faulkners Track –
tumbling
sable into gold.