Panoni te ao Change is the only constant

Māori identity is not a fixed phenomenon, it is dynamic,
shaped by increasingly complex external forces

An art exhibition and sale in Auckland in December

We have been negotiating an exhibition with the Kunsthalle Hannover (Hannover Public Gallery) for the last two years. We want to exhibit and sell art from emerging Māori artists in Europe. This December we will have a pop-up exhibition in Auckland that is a reimagining of our project in response to the global pandemic. Following on from the exhibition, digital works by the Māori artists will be sent to Hannover, and local artists in Germany will be asked to respond to the work. Other opportunities in Europe are also emerging as we develop this project.

The concept for our December exhibition

Māori and non-Māori artists respond to the Māori world – a conversation and artistic exchange, if you will. Any art produced in Aotearoa is in and of itself responding to the Māori world. This core concept will be interpreted broadly. What happens when te ao Māori provides the starting point for cultural discussions locally and internationally?

Artwork samples from the project 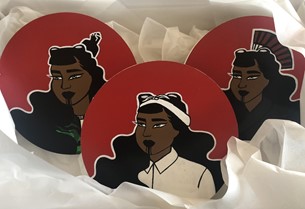 Ngararangi Palalagi’s acrylic on plywood works explore the intersectionality of ethnicity, gender and neighbourhood. These whimsical creations show how Mātauranga Māori is being influenced and shaped by international and digital forces, and reflect on the commodification of Māori images and faces.

Haoro Hond is a young emerging artist from Taranaki. Having developed quality skills and knowledge at Toihoukura, in Gisborne, Haoro completed a three-year undergraduate Degree in Māori Visual Arts under the guidance of some of the most influential Māori artists our culture has to offer. Since leaving Toihoukura in 2014, Haoro has represented his whānau in exhibitions across New Zealand. Inspired by the theory ‘Colour the World’, Haoro specialises in balancing copious amounts of colour which he uses to portray his perspective on people’s emotions, current events, traditional texts and history and their association to colour. 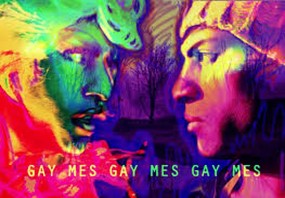 Tia Huia Ranginui (Ngati Hineoneone) was raised on the banks of the Whanganui Awa, where she resides today. Her turangawaewae features prominently in her work and provides a rich visual background to the themes she explores and critiques through inciting local narratives and subverting the way Māori have been (mis)represented in art and imagery. She has exhibited widely and her work is part of the Sarjeant Gallery (Whanganui) collection. 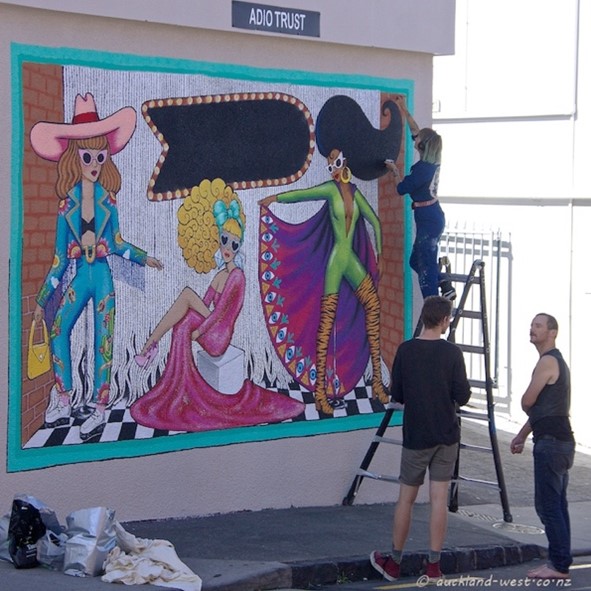 Xoe Hall is a full-time pop artist, muralist and designer for her two clothing labels Mortal Gods (customized jackets and patches) and Xoe Hall. Xoe has displayed her works in solo exhibitions and numerous group shows throughout New Zealand and internationally. Her femme fatale paintings have been described as ‘delightfully subversive’. Xoe’s practice celebrates the Māori world view, through the mediums of pop and street art. At the same time, she continues the traditions of leading Māori contemporary artists such as Robyn Kahukiwa and Emily Karaka, with a focus on wāhine toa and female deities. This jumble of influences reverberates through her work on buildings, canvas, board and digitally. The mood is assertive, playful and modern.

Vaughan Rapatahana: Can you please tell us your tribal affiliation(s)?

Anton Blank: Ngāti Porou-Ngāti Kahungunu through my mother Arapera (Kaa) Blank. My father Pius Blank was a Swiss migrant who came to Aotearoa in 1952.

VR: Can you also please tell us something about yourself? Publishing (and writing) career and genre(s), including current/recent projects and any images/examples from these that you would like to send through. Overseas travel and interconnections? (For example, Ora Nui 4)?

Since 2012 I have been publishing the Māori literary journal Ora Nui. This year’s special edition will be available in August and explores the Austronesian migration. This migratory theory traces Māori origins back to the Indigenous peoples of Taiwan. Ora Nui is a vehicle to showcase emerging and established Māori writers, and generate an international discussion about indigeneity and identity.

AB: I don’t want to force Māori writers to do anything they don’t want to – or impose anything that makes our identity feel like a burden. Currently, less than 10% of Māori are fluent in te reo, and yet the language is always present in our literature to some degree. This will change over time as more New Zealanders learn the language. Writing and publishing in te reo will flourish even more as a matter of course. I support the evolution of this kaupapa 100%.

VR: Do you think you might have a piece of flash fiction or a prose poem for us to include, please…? Especially if it relates to the theme of this issue, namely KAI.

Kana met Kahungunu at a te reo Māori class at Unitec. Being a new migrant and having read so much about te iwi Māori before she came to Aotearoa, Kana wanted to learn the language. She’d read how there was a veritable revival of te reo Māori, and Kana had to put her name on a waiting list for the Unitec gig. After six months, Kana received the email to say that her class would start in three weeks.

The tutor was a plump brown wāhine Māori, in her thirties Kana guessed, with a big personality that more than matched her physical presence. Her name was Sonya, a whānau name she explained to the class – because Sonya had a Dutch father. And yes, I have been to Holland, Sonya said to the class. The houses there are so tiny, she laughed, I could barely get my backside through the front door. Kana couldn’t take her eyes off Sonya’s moko kaue, which kept an eye on proceedings, surveilling the class, ensuring there was a requisite respect for proceedings. You will find, Sonya went on, that te reo Māori, it’s like food for the soul. Sonya’s face relaxed as she held her gaze at middle-distance, inhaled for a second before she returned her attention to the class.

Kahungunu and Kana worked in the same small group, using the coloured Cuisenaire blocks to practice their faltering new vernacular. Kana didn’t find the pronunciation difficult, the sounds were very similar to Japanese. She held back though. Kana didn’t want to overstep the mark by out-performing her classmates. The millennial Kiwis were confident, assertive, most of them had some learning from high school. When Kana talked to them during class break they told her that they supported Māori rights. They explained the history of the Treaty of Waitangi.

On the other hand, Kahungunu stood by himself when the class had their cup of tea. He lowered his head, in an effort to make himself smaller, Kana thought to herself. When it came time for Kahungunu to repeat sentences after Sonya, he was faltering. At one point Kana thought he would cry. Jeez, I was so dumb at school, Kahungunu said. Kana felt a lump in her throat, and her eyes watered. She dabbed at the corner of her eye with a tissue. Kana approached Kahungunu after the class to tell him he’d done well. I went to Tokyo with my high school volleyball team, Kahungunu told Kana.

Back at Kana’s apartment, Kahungunu stroked his enormous penis in front of her. I just want you to watch for a while, he told Kana. I’ve never been with a Japanese woman before. Kana took her clothes off slowly, an item at a time as Kahungunu masturbated and filmed his appendage on his iPhone. After he came, he wiped himself with a paper towel that Kana brought to him from the kitchen. He said goodbye without touching Kana. This was a weekly ritual until Kana told Kahungunu that she wanted him to touch her. Kahungunu was tense when Kana first kissed him, and as she massaged his biceps with her finger tips, his mouth opened and he moaned appreciatively. Later when Kahungunu was inside her, Kana’s thoughts drifted back to Sonya’s moko kaue and blood rushed to her extremities.

I’m calling the baby Kai, Kana would later tell her Instagram fam. She had over 100,000 followers. In Japan it was easy because she’d been on a popular game-show on television – it wasn’t difficult to feel famous there. She’d been posting about her life in Aotearoa, and Japanese followers in Tokyo and New Zealand said they admired the way she could speak te reo Māori. She’d been a guest speaker at an end of year function at the Japanese society in Auckland. We owe it to the indigenous people of Aotearoa to learn the language, Kana declared. I’ve become a revolutionary for the language.

As Kana advocated for te reo Māori, the tone of the comments on her Insta feed changed she noticed. It was occasional at first, young white women telling her she was appropriating Māori culture, you need to check your privilege one of them said. One morning she woke up to a string of comments from followers she had to assume were Māori from their pictures and the description in their profiles. HANDS OFF OUR LANGUAGE. STAY IN YOUR LANE. Further down, a muscular, tattooed Australian, told Kana she was yellow peril.

Kana went to Kai’s cot, where he lay on his back, chortling and gurgling. He was an easy baby and as Kana stared at Kai, she felt at peace with herself, secure in her motivations, brave even. She’d called the baby Kai as a reference to her te reo Māori teacher Sonya, the language, it’s kai for the soul. Kana could hear Sonya whispering in her ear softly. And in Japanese kai means restoration, I love this duality, Kai told her followers. She’d had no contact from Kahungunu for a month or two, I don’t get that you have no interest in your son, she said in her last text message.

As she suckled Kai in her favorite armchair, Kana started to think about her post for today’s social media. I haven’t learned te reo Māori for you, she would say to everyone, I’ve done it as a sign of respect and to preserve a language that will not survive if more of us don’t learn it. It’s an amends too, to the countries that the Japanese has colonized, and the indigenous cultures we have eroded and damaged. And as the mother of an indigenous child, I am proud to say that I can communicate with him in his mother tongue. Kana will sign off the post with kua mutu! and within a week she will have thousands more followers and be interviewed by famous New Zealand journalists.

Anton Blank is a child advocate, project manager, communications consultant and publisher based in Auckland, New Zealand. Working across a portfolio of projects, Anton has a special interest in indigenous children’s issues and indigenous literature. Anton has over thirty years’ experience in social work, communications, social marketing and leadership. Collaborating with a cache of writers, academics and subject matter experts, Anton Blank is now broadening his focus from indigeneity to diversity. The journal Ora Nui is focused on generating debate about diversity and giving people skills to deal with a diverse range of population groups. www.oranui.co.nz

An essay by Anton Blank on politics, culture and identity can be found at Overland.

← Interview: Kathryn van Beek on writing for adults and writing for children Agnes Marton’s ‘Mission Jaguar’, and a conversation with Michelle Elvy →