Two poems from the book…

Homage to the early Polynesian navigator 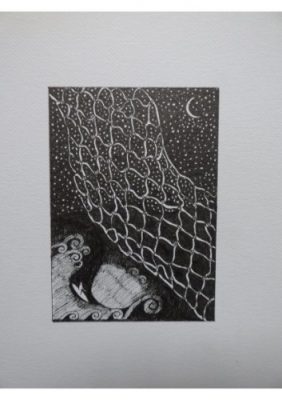 This waka I guide with chant and song
for this is the whakapapa of past voyages,
the voice of my ancestors
who went fishing for islands.

We leave at dusk, our eyes fixed
on landmarks behind us.
By looking backwards,
I chart the way forward.

I observe the stars in Tane’s Basket.
Each one known by name since childhood.
Each one cloaked in a different brightness.

I recall the clouds that name an island,
reflections that warn of reefs or shallows.
Some clouds mirror the island beneath.

Each wind brings its own song
to the rigging, hangs up a cloak feathered
with many scents.

Migrating birds show me the seasons.
I study curlew, plover, long-tailed cuckoo.
The albatross studies me . . .
At dusk birds fly in straight lines
to their island.

If I sleep and stray off course,
I am woken by drumming under the hull.
Each current has its own rhythm.
I adjust to the rope that trails
the original path.

I know the waves
that mark the approach to each harbour,
like the way hair flows on the back of a dog.
As each one breaks against the bow,
it tells of distance or nearness.

When Hoaka, the crescent moon, rises
she scares the fish away, being the first moon
bright enough to cast a shadow.
When Muku is in the sky,
it is a night of good fishing.

if tonight is the night I will catch an island. 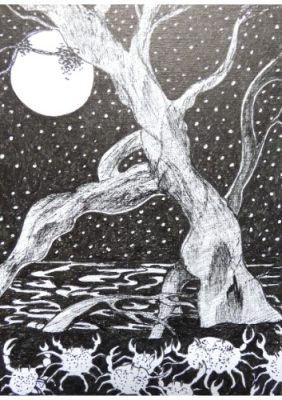 Terrified by what we might see,
we ran from our beds to the edge of the bank,
scanning the black estuary.
Here in the daytime, daffodils,
leggy ballerinas,
had shivered in the wind –
how had we travelled so fast
from innocent to ominous,
deafened by this crackling?

Was it a fire without flames
creeping through the toetoe?
A fire that fed on darkness?
The night was tight-lipped,
the moon, Methuselah-hag, shuffled
across the mudflats on her sticks
of pohutukawa.

Crabs!
It was crabs up from their caverns,
clack-clacking their claws,
snipping the air with bony scissors.
Crabs,
in their white evening jackets,
courting the world
with such loud kisses!

Author commentary: the poet in her own words…

The best poems are always on the back burner. That’s the way it is with me, and Wayfinder has been slow-cooking for a number of years.

My muse demands patience, and work that demands everything from me. I also set a high bar for myself. Not a flick-off in a cafe, not something that’s really a blog, and not something outrageous just to be talked about. Fifty drafts if that’s what it takes.

Finding the right word could take all day – or longer – and I don’t mean in a dictionary or thesaurus. Call me old school if you like – I’m 67. I’ve been part of the NZ poetry scene since the 60s – but I like to get into the essence of things: an insect, an animal, another culture. This is not something that can be taught. I believe I was born a poet (art is what I do for a living). 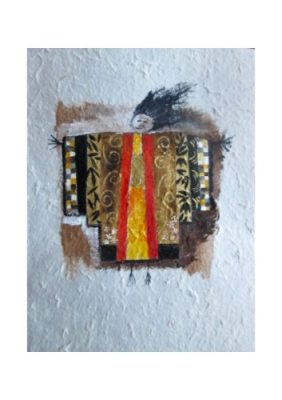 ‘Letter to Tome Torihama’ for example, took weeks of research, absorbing the Japanese culture through art works and objects, talking with Japanese friends. Re-acquainting myself with the language and its rhythm. Exploring eastern ways through my art (e.g., kimono girl) as another doorway into the magic world of the poem.

And rhythm, which is important to the ear in poetry, picks up the beat of another culture and the sea in Wayfinder, in the sound of an insect in ‘Cricket riff’, in the rush of the air in ‘Cycling’.

Wayfinder seemed such an appropriate title because I’m not just exploring the Polynesian navigator – immersed as I’ve been in the past in Maoritanga, restoring kowhaiwhai patterns on marae, living with the people – but trying to bring forth the rhythm of our own blood as New Zealanders: Type P, Pacific Rim. Like listening to the pulse in your ear when your head’s on the pillow. Its history of sea, volcano, earthquake, their fragility and beauty which we live with everyday but take for granted – like clouds.

Being an older poet doesn’t give me a day pass to confidence and self-satisfaction. Masterpieces are always the next work. In the process of getting the manuscript ready for publication, I brought forth many poems that had the sour taste of not being quite ready, gave me a “green apple” pain in the amygdala! Maybe I didn’t have the skill after all? My husband — Leonard Lambert, another NZ poet and painter – is spot on when he says, “If it doesn’t sound right, it’s not right.” Back to the pot for another long simmer. 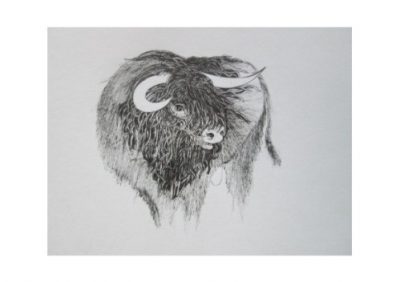 So the last two years enabled the poems to mature, and bought time in which to do some companion drawings. I prefer to call them that, as they don’t illustrate the poem but stand alongside it. But which drawings to choose? Now I had two art forms to edit!

Having been a teacher, counsellor and caregiver in palliative cares has given me wide experience in the ways of people – animals and creatures just endear themselves to me – so I selected the ones that might interest readers most, from areas least written about.

I hope you enjoy my art work on the cover and the accompanying the poems in Wayfinder – it’s something different for this, my third volume.

A reader of the literary journals of the late 60s and 70s would have noted the name Jan Coad. Hone Tuwhare certainly did, and James K. Baxter; Jan received admiration and friendship from both.

In 2005, writing under her then married name, FitzGerald, Jan launched her long-gestated collection, Flying Against the Arrow (Wolfdale Press). This was followed by On a Day Like This (Steele Roberts, 2010).

All the while the poet was quietly maturing as an artist, and in this collection the two talents perform a happy tango.