Book Interview: KM Elkes, All That Is Between Us

K M Elkes, Micro Madness 2019 judge (with Iona Winter), on writing flash fiction and his new collection, All That Is Between Us, released by Ad Hoc Fiction in June 2019. 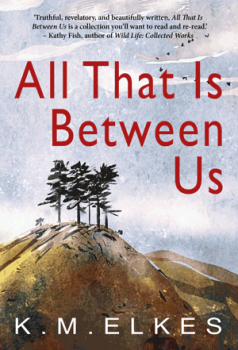 Flash Frontier: Congratulations on your first collection of flash fiction, Ken! When did you start writing flash fiction, and what is its appeal, for you?

KM Elkes: I dabbled with fiction and comedy writing over the years, but the pressures of earning a living and, to be truthful, a lack of confidence meant I didn’t start writing regularly or in earnest until 2012. I joined an online writing forum called Bootcamp which emphasised hard work and the production of flashes and short stories through prompts. That steep learning experience was exactly what I needed. Flash fiction forces writers to concentrate on language and key craft elements such as establishing voice in the opening, hard-working dialogue, characterisation through a few brushstrokes, and more.

Flash also has an important appeal for me in terms of how it can (with support) be a gateway for people from marginalised and low-income groups to become involved in writing and publishing. I don’t think we’ve really started to understand how useful flash could be in tackling diversity and exclusion in the publishing industry, probably because the mainstream publishing world is ignorant about flash as a form.

FF: Does your earlier work differ to what you are writing today?

KME: I’ve learned a few things about the pillars of good writing over the last five or six years, which hopefully means my work overall is stronger and more consistent. I’ve come to learn that voice is at the root of everything. I also understand that an author needs to trust the reader to use their imagination to fill in the gaps. I had a few successes early on (I won the Fish Publishing flash prize in 2013) but in some ways that was more luck than judgement. I think my drive with writing is simply to get better, to always push to improve what I do and take more risks, be bold enough to go to some weird places, even if that means failing.

FF: What else do you write, besides short fiction – and does your experience writing compressed fiction impact your other writing?

KME: It has kind of been the other way around for me – I’ve always written for a living, working as a news reporter, a features writer and subsequently an editor and in charity communications, so my working life has always revolved around taking source material and compressing it into a narrative with a message.

In terms of fiction, I began writing longer short stories four or five years ago, which introduces fresh challenges. I’ve also recently started a novel, where structure and arcs (both character and narrative) come much more into play. But all of these forms feed back into the other, flash fiction included.

Perhaps the most important thing I do which impacts on my work is not writing at all, but reading. As widely as possible, across genres and cultures.

The collection: In the author’s words

All That Is Between Us was created in much the same way as many of the stories within it – take one haphazard, dishevelled writer, mix in a dose of quirky imagination and a tot of weirdness, then add a prompt to ignite the whole thing.

In this case, the prompt was a question from Jude Higgins, co-director of publishers Ad Hoc Fiction, as well as the founder of the international Flash Fiction Festival and the Bath Flash Fiction Award. We were both booked to do a radio interview about flash, and in the pub afterwards (because, clearly, there should always be a pub afterwards…) Jude asked if I had considered publishing a flash fiction collection. The answer was a categorical ‘no’. I’ve never written flash with an overall endgame in mind or specifically for any publication or contest. And I genuinely didn’t believe there would be anything to tie a collection together until, after Jude’s question, I began to make a tentative list of stories. Only then did I see the thread running through them.

All authors have thematic obsessions, even if they aren’t always obvious to the writer themselves (especially haphazard, dishevelled ones). My flash fiction output encompasses a seemingly random spectrum, from stories about sex robots through to the musings of obscure German philosophers, by way of melancholic orangutans, grumpy tree-eating religious zealots, solar systems created from bowls of fruit and the character arcs of people shipwrecked on an island of plastic rubbish, after floating there in a contraband tumble drier.

What holds all these disparate stories together is some sort of focus on the complex fragility of human relationships, particularly how much we are shaped by a need to connect and belong, and how that need brings both joy and pain.

After accepting Ad Hoc Fiction’s offer of publication, I began the process of editing and writing new material. And that’s when the structure of the book revealed itself. It began to shape up as a kind of triptych. On one ‘side’ are stories about children and parents (or those left childless). On the other ‘side’ are flashes around friends and strangers. Between them, a longer section about the whole messy business of romantic and sexual relationships, from young people learning about love to older folk trying to come to terms with the comfort and loathing that of decades of togetherness can bring.

The book’s title was another gift from the backwaters of my mind. I wanted a title that conveyed something of the central themes that colour the book, without being too on the nose. Nothing I thought up seemed adequate, until my subconscious took over.

The last time I’d let that happen I’d found the phrase ‘comedy is shaped like a lozenge’ written down. This time, things were more successful. One morning, I found the words ‘All That Is Between Us’ scribbled on the notepad I keep on my bedside table. I didn’t think much of it at first. But when I read it again a few days later, I realised how flexible the phrase was, and how, by placing the emphasis on different words, it changed meaning and mood. Just like a relationship, the words of the title can be interpreted differently by different people. And so All That Is Between Us was born.

You could have been amazed at the pureness of nails, a nostril’s arc, the creases of plump hands gripping like tiny, soft-shelled crabs.

In a few more years, you could have ended a sentence ‘…so that’s why rain is wet, Emily.’ You could have made up any old explanation, as long as you got to say her name.

You could have stood at the window (it would have been a bright day), her on a chair, tiptoed, studying the genius of the roadsweeper’s whirling brush outside.

You could have gone to Aqualand and watched her churning water in bright pink armbands, a plastic bobble in her hair. You could have talked to the father of a boy she plays with, shyly splashing.

You would have agreed to meet him later, for a pint and the usual chat about sons and daughters, family colds, the hundredth bedtime reading of familiar Grimm tales. You would have stayed till closing time and thought you had made a friend.

You should have turned off the radio, not listened to the voice telling you, as if it meant nothing at all, that there is snow, coming slowly from the east.

“Truthful, revelatory, and beautifully written, All That Is Between Us is a collection you’ll want to read and re-read.”

“Whoever you are, whatever you like to read, you need these stories in your life.”

Tania Hershman, author of Some Of Us Glow More Than Others

“These insightful and disarmingly honest stories shimmer with quirky brilliance.”

“K M Elkes writes like a fallen angel, making the ordinary divine…This is breath-taking flash fiction at its finest.”

“Brings a Cheeveresque emotional punch to his stories, married to a sweet, left-of-field insight that is all his own…a masterclass in the heart-jolting satisfaction of great flash fiction.”

“This collection is crammed with powerful and moving images…The stories move together like a murmuration of texts, each slipping in and out of the other, making every fragment part of a whole experience, almost as if it were a shattered novel you’ve found on the floor and are trying to piece together.”

David Gaffney, author of All The Places I’ve Ever Lived

“K M Elkes explores the mechanics of relationships with both sober realism and a sparkling, dry wit. This book is a string of perfect moments.”

“These razor-sharp stories ..are full of bruised beauty, and they will stay in your heart. A brilliant book.”

David Swann, author of The Privilege Of Rain

Where to buy All That Is Between Us

All That Is Between Us was published on 22 June 2019. Available now from Bath Flash Fiction Award https://bit.ly/2M0rB5z and Ad Hoc Fiction.

KM Elkes lives and works in the West Country. He is the author of the flash fiction collection All That Is Between Us, published by Ad Hoc Fiction in May 2019. He has won or been placed in a number of international writing competitions, including the Manchester Fiction Prize, the Bridport Prize, Bath Flash Fiction Award and the Fish Publishing Prize. His short fiction has been published in nearly 30 print anthologies, as well as literary magazines such as Unthology, The Lonely Crowd, Structo and Litro. He is a short story tutor for Comma Press and has led workshops at the UK Flash Fiction Festival and for National Flash Fiction Day. His work has featured on BBC radio and on school and college curricula in the USA, India and China.