This month we asked innovative New Zealand flash fiction writer Leanne Radojkovich to share her practice for getting flash fiction to a wide readership.

Introduction and a theme

This issue of Flash Frontier is dedicated to my friend Miles Hughes who recently died. Rachel had asked me to write about my street art experiment months ago and scheduled the piece to appear in April. Life seems so strange and circular; drafting this piece so long ago, for this issue that became the one commemorating my friend. It’s so wonderful to be included here. The editors also asked if I could provide the photo for the scattered theme – which I have, a pic of hare’s tails, at dusk, at Pakiri.

Flash in the world

I’ve been experimenting with getting flash stories out into the world via YouTube, SlideShare and graffiti. All three pathways have been such fun and like a message in a bottle – once released, the stories have popped up in unexpected places. 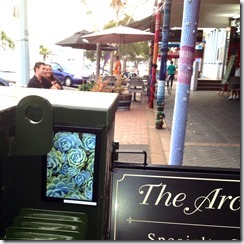 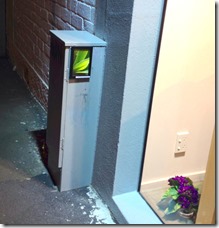 The digital options have been easy to track thanks to awesome analytics. I’ve had over 3,000 views from ten flash story videos on YouTube. Viewers from NZ, USA and Canada top the list but the clips have been seen everywhere from Finland to Pakistan to South Korea. 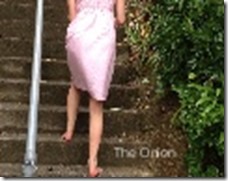 All the readings are filmed in a single continuous shot, from behind, walking in bare feet. I feel these three constraints have helped create a unified collection. And I’m very low-budget hi-fi, filming everything on my iPhone and recording the audio in a studio.

Still from The Onion, by Leanne Radojkovich.

I also have three presentations on SlideShare which have been seen in over 50 countries. I didn’t know how much I’d love the platform until I posted my first flash story – The Onion. This has nine slides which the viewer clicks through at their own pace and the story unfolds like a photographic cartoon book. 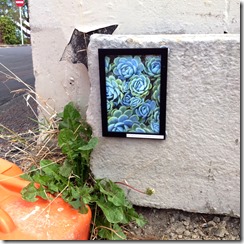 The graffiti experiment has been crazy good fun. I frame my own nature photos and paste a flash story on the back, then sneak around town posting these ‘PinUps’ in public loos and phone booths, on shop windows or park benches – with a sticker on the front saying “Pls take me home – I’ll look good on your wall”. 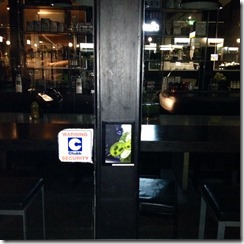 One of the PinUps was picked off a café wall in Kingsland by an American tourist. He took it home to Wisconsin and sent me a photo of the PinUp hanging on his lounge wall, saying it was his favourite souvenir from his visit to NZ. “I have left the ‘Please take me home…’ sticker on it in the hope that someday it will disappear from our wall, late one dinner-party evening, to look good on another wall and carry the story of mysterious, clean Doreen into another imagination.” 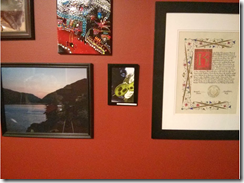 New York’s Awkword Paper Cut zine did a piece on my PinUps project and as a result two things happened:

Amsterdam’s street art ArTicks Gallery mentioned them on their website’s front page – right next to a piece on Banksy; 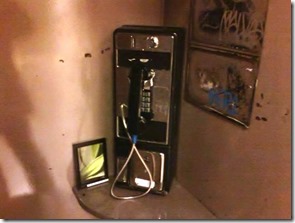 I sent a PinUp to a reader in the USA who posted it in a New York Public Library phone booth.

The editor of Awkword Paper Cut calls the PinUps “a wonderfully organic way to make a connection. Because they are discovered by chance along someone’s way, there is a deeper sense of meaning to it all.”

“A whole new spin on self-publishing,” a friend wrote on a Facebook post about PinUps. “Surreptitious arts activity. Asking for permission would take something away from it.” 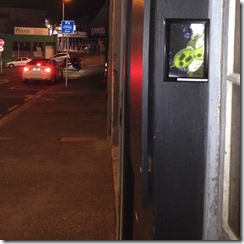 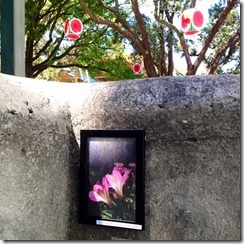 It’s been pure pleasure exploring both the digital environment and the analogue, via street art – outcomes unknown. Leanne Radojkovich writes flash fiction stories – which she says should be nimble as deer. She’s been short-listed for prizes here and in Ireland, and her stories have been published in NZ, UK and USA. She likes experimenting with new media and shares her work on SlideShare and  YouTube. Leanne also likes old media – street art – and posts flash stories around town in phone booths, public loos and shop windows. Please see her website for more.