This month, we celebrate Flash Frontier editor and multi-talented writer James Norcliffe – who enjoyed a standout year in 2022 with the publication of his new YA book, The Crate, and the announcement of his Prime Minister’s Award for Poetry. We are delighted and celebrate with him. Here, we talk about his new ghost story. Readers can also look forward to his next poetry collection, forthcoming from Otago University Press in the coming months.

Flash Frontier: Congratulations on your new book, The Crate! This is a kind of ghost story — a story in which setting and mood is so important. You note that you discovered the setting in a real-life place where you had spent some time. Can you tell us more? 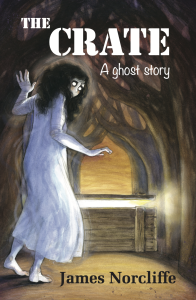 James Norcliffe: The setting is a thinly disguised Moana on the West Coast. In the book I call it Tunamoana. Moana is on the banks of Lake Brunner and beside the Arnold River which feeds into the lake. Both river and lake feature largely in the story. Moana was a fixture in my childhood on the Coast as when my father was taken to the Sanitorium in Christchurch for a couple of years when he developed TB, my mother, my little sister and I stayed in our house near Greymouth. We visited Christchurch regularly by railcar and there was invariably a stop and long wait at the Moana station which overlooks the lake. Perhaps because it was early morning the lake seemed either dark with rain or mysterious in mist. Later my wife Joan’s sister had a holiday house in the village and we stayed there from time to time.

FF: From there, how did you build the setting and mood further?

JN: I’ve mentioned mysterious. Lake Brunner, unnamed in the book, seemed the epitome of mystery and when I was thinking of doing a ghostly type of book I remembered it as a perfect setting. In the end both river and lake became so important to the story they more or less became characters in their own right. I pushed the idea of dark water, the mistiness of the lake, the turbidity and swiftness of the river. Both, too, are ambiguous and unpredictable: at times beautiful, at times sinister. A lot of action takes place in darkness with the water of lake and river adjacent.

FF: I don’t really blame Amy for opening the crate. Such a wonderful opening line — how can we not read on? Was this always the opening line? Did you start writing the story there?

JN: More or less. I love problems and mystery. A lot of my writing involves coming up with a problem or a series of problems and then solving them. In this book, the initial problem was the crate: why was it delivered to Bide-a-wee (the holiday home), who sent it, and, more mysteriously, what could possibly be inside the thing. I then added the clincher: why was it very heavy when delivered and then strangely light later on when it nobody had opened it in the meantime. Launching straight into the story with Amy opening the crate foreshadowed all of these weird little mysteries. Of course, then there were the wing nuts!

JN: Certainly the characters take over. I have a vague idea of the age level of my target audience and that probably influences the level of language, although I’m very resistant to the level of simplification of language and vocabulary that constitutes ‘dumbing down’. If I’m honest, I’m really trying to write the sort of book I would have enjoyed – and still enjoy – at that age. I do like to differentiate the characters and to bring this out through their reactions to events and through the things they say to each other.

FF: You are a master of the young adventurer’s voice, from your earlier Loblolly Boy to the more recent Mallory. How do you know how to capture a young character’s voice with such specificity and energy? Do you listen to young people around you? Do you hear your own youthful self? Are you transported to your characters’ worlds as you engage them and move through their stories?

JN: Through taking creative writing classes with young people and visiting schools I keep company with those I write for – my three little grandchildren too of course, or they will be useful in this way when they get a little bigger. But largely it’s instinct and keeping in touch – as I intimated in the previous answer – with my younger self, even though he’s quite a way away now. And yes as the characters become more sharply realised I live with them and share their journeys. Perhaps that’s why I rather like first person narrative, as here in The Crate.

FF: You are also a serious poet and editor. How is writing for young adults different for you as a writer — how do you change hats for each project? — and also, where are there similarities, across the genre?

JN: I’m not sure young adult is my genre – at least if young adult is defined as the lower voting age as recommended by the supreme court -16+. Perhaps junior high school – years 8, 9, 10 perhaps 11 is my catchment area. I prefer fantasy too rather than the angst of maturing and the struggle with social issues ‘young adult’ implies. I have written about the harmony between fantasy and poetry: the imaginative reach, the layered meanings, the symbolism and the like found in each and I have no real problems moving between the two practices.

FF: The new issue of ReDraft was released late 2022, can you please share a bit about this project, and what readers can find there?

JN: ReDraft is a wonderful fixture on the Aotearoa/New Zealand literary scene. It was and is the brain child of Dr Glyn Strange. It began 22 years ago as an adjunct to the Christchurch School for Young Writers which Glyn began thirty or so years back. He retired from CSYW two or three years ago but continues with ReDraft. Alan Bunn was the first editor with Glyn and I joined the following year. It gathers the very best writing from teenagers from all reaches of New Zealand and today is a handsome volume with very high production standards despite being processed at breakneck speed to enable publication in the same year as the contest. I say contest, as ReDraft was conceived as a competition the prize being publication for the successful entrants. Another feature as the project commits to publish all pieces that are sufficiently terrific and the book expands or contacts to accommodate these. And the best pieces are terrific, breathtakingly so sometimes. It’s great that fellow-editor Michelle Elvy has also joined the team.

FF: Can you share an excerpt from the book?

JN: Since you quoted the opening line, here’s the few paragraphs following:

I don’t really blame Amy for opening the crate. It was

such a big mystery and the wing nuts securing the lid

were so tempting. She did what we all wanted to do really.

Well, perhaps not Jack – Jack had more sense than both of

us put together. The only difference between Amy and me

was that she was reckless enough or silly enough to twist

the wing nuts off and lift the lid.

The trouble was, Dad had told us not to touch it. And

Dad had used his if you don’t do as I say voice: the one we

know means you’ll all be grounded for the next approximately

three hundred years. But as I said, Amy was incredibly reckless

or incredibly stupid. Probably both, but Amy also knew she

I don’t blame Jack either for not trying harder. He didn’t

want to do it. But he caved in when he saw how determined

Amy was. Besides, he was a couple of years younger and

If I blame anyone, I blame me. I could’ve stopped Amy.

Write idiot on my envelope and put a stamp on it, as Uncle

The crate arrived early in the morning.

We were staying in Pop’s bach at the lake. The bach has

to go up north to be with Pop, it seemed a good solution

for us to go with Dad, it being the school holidays.

We never get mail at the bach. It doesn’t even have a

letterbox. That’s why the crate was such a surprise.

a desperate hurry. He was just giving us all our last-minute

instructions for the day when there was a loud knock.

A man stood there holding a leather clipboard. We could

just see his old van parked at the top of the drive, its engine

The man merely indicated the street with a flick of his

head. Clearly he meant that the crate, whatever it was, was

up there, presumably still in the van.

Dad glanced at his watch. ‘I really have to go,’ he said.

‘Could one of the kids help you?’

The despatch man looked witheringly at us then shook

Dad followed the guy up the short gravel path to the

van. Dad had flung a parka over his jacket because of the

heavy mist just on the verge of turning into rain.

Readers can find the book here.
More about the author here. 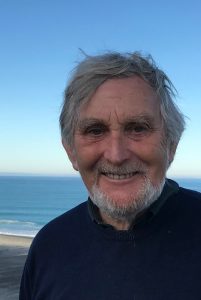 Poet, novelist, editor and literary odd-job man, James Norcliffe has published ten collections of poetry, more than a dozen novels for young people and, in 2022, a novel The Frog Prince with Penguin Random.

Later in 2022 Quentin Wilson Publishing brought out his junior novel The Crate, a ghost story set on the West Coast.

His next book of poetry is forthcoming in 2023. Norcliffe was awarded the Prime Minister’s Award for Poetry in 2022.