in conversation with Michelle Elvy…

Michelle Elvy: You’ve been fascinated by Antarctica for many years. How did your interest in this continent begin? Where did the earliest seed of interest start to grow in your imagination?

Claire Beynon: To be honest, Antarctica – the place, and my travels there – took me completely by surprise, Michelle! The ‘idea’ of the continent – her remoteness and history, her pioneers, myths, mysteries and lore – is very active in the collective imagination but my early interest was really rather detached and impersonal. I’ve always considered Antarctica’s form beautiful and compelling – her outline so like our human brain -, however the idea of traveling there might never have entered my thinking had I not crossed paths with a polar biologist in Christchurch in 2002. I was in the city for an exhibition opening; he was en-route home to the US after a research season in Antarctica. Our conversation was brief – one of those chance encounters that lasted all of seven or eight minutes – and would have been entirely unremarkable had our paths not crossed again in exactly the same spot two years later.

Sam, the biologist, seemed to me rather blasé about his travels – twenty-four summers on the ice had, he acceded, dulled his sense of wonder and appreciation. During our second, equally brief, conversation in 2004, I said how lucky he was to have spent time in such a wildly liminal space and heard myself saying I’d give anything to have the privilege of working there one day. I handed him an invitation card to In Conversation an exhibition of new paintings that had opened the night before at The Arthouse Gallery in Gloucester Street. Unbeknown to me Sam’s flight home was delayed by eight hours; he went to see my show and a year later contacted me via the gallery. Standing in front of my paintings had apparently been a surreal experience; he said they carried echoes of the Antarctic landscape he knew so well but how could that be since I’d not actually been there? He went on to say that if indeed I’d been serious about wanting to go down to the ice, he’d received permission from his authorities to include an artist in his research team for the coming 2005 season. Would I like to accompany him and his team to their field camp in New Harbor?

So that’s how I got to go to Antarctica! Never underestimate the power of everyday conversation!

ME: By now, with the aid of National Geographic, David Attenborough and more, we’ve all seen photos and film footage of Antarctica. What was your first impression of the continent, beyond what other typical television views might see?

CB: In the weeks leading up to our departure, I chose to stay away from others’ written and visual accounts, intent on meeting the place in much the same way I approach a blank page or canvas – namely, allowing the space to reveal its own story rather than have me impose my preconceived ideas onto it.

I could not have anticipated the upwelling of feeling I experienced when I first laid eyes on the continent. We were fortunate to have the weather on our side so made our flight during the daytime and in settled conditions. My first sighting was a bird’s eye view, through the porthole of a C17. I was surprised by tears. And I swear I felt the continent pulse in my own chest from 30,000 feet up.

Landing, then stepping out onto the ice had an altogether ‘other’ quality about it.

Step out onto white not as a body bearing any weight, but as a feather might. Think of ink in a quill drawing a cantata out of light

I doubt I’ll ever be able to fully articulate how strangely – and immediately – at home I felt in that vast and pristine landscape. I’m a person generally content and present wherever I find myself; it’s rare for me to yearn to be somewhere other than where I am. Not so with Antarctica. It’s ten years since I was last there and still I get homesick for that time and those spaces. It is every bit as alive in me now as it was when I was there. Despite the physical dangers, the seventeen-hour workdays and the raw austerity of life with five men in a remote field camp, there was a purity and meditative simplicity to those months in New Harbor that I welcomed and drank in deeply. And the homesickness – for wont of a better word – that I was left with is not something I would wish away. It’s a companionship of sorts, a reminder of the depth of connection I feel to that place.

A love poem for Antarctica and her rebel wind

She never sleeps deep REM sleep.
No. She tosses and turns, cannot lie

still with bones and blood
at ease, always keeps one eye

open. The wind might stir
at any time, touch her cold

white skin, travel every willing curve
and contour. She hears him

long before he comes
without warning his hands trace

her upper valleys, her mountains
and hanging glaciers, travel

her frozen coastline. She anticipates him
as the beloved awaits a lover.

There’s nothing silent or passive
about them. And when all is said

and done, they both know
their meeting will shake them.

It always does. But see, it’s nothing
more than temporary dishevelment.

Theirs is a relationship refined
by this curiously lyrical insistence.

ME: And related to the above: It must be something else entirely to go there and see the expanse and the light, and to feel the ice under your feet. When you first engaged Antarctica, did you feel it was something external – something to touch and see and move through in a physical way – or was it immediately something to internalise and reflect on with time?

CB: I’m not sure why I should feel this way about Antarctica more than any of the other places I’ve travelled to, but to me Antarctica is a continent of music and light. Whilst there I encountered a palette of colours and repertoire of sounds I’d not seen or heard before and that I have neither seen nor heard since.

Rare sounds abound in these places where wind is dressed in white.

Ice sings as it freezes and thaws, has its own exquisite calligraphy determined by subtle fluctuations in temperature and the changing concentrations of oxygen and salt; frozen waves heave and echo with the clicks of far-distant Weddell seals; tide cracks expand and contract, stutter and hum in synch with the swell of the ocean below; wind plucks tunes from tent guide ropes; Dry Valleys’ sediment tumbles percussively across the pack ice, pummeling Jamesway shelters and drumming on freezer boxes, ply lab walls, skidoos and empty propane tanks.

ME: I know you’ve said Antarctica lives in you as much as at the bottom of the world. How does the continent continue to draw you in? And in what ways does it occupy your psyche?

CB: One of many things that made a big impression on me in Antarctica was how little we need in the way of material things to function well and be happy. I returned home wanting to shed possessions (in the outer world) and review my attachments (in the inner) and to live in a way that’s more receptive and response to things as they are, rather than as I might wish them to be. I returned wanting to develop my listening skills so that I can live increasingly receptively, intuitively and responsively. I returned with a renewed sense of love, care, awe and respect for our living, breathing planet. And I was touched and emboldened by the collaborative work that has led to a recalibration of my studio practice. We have much to teach each other through our different disciplines, skill sets and ways of seeing and perceiving the word! And we can accomplish so much more together than we can alone.

I’ll finish with a few lines from my poem Whorl in which a scientist wakes up to the fact the porcelain cup from which he drinks his daily tea is made of clay that contains fossil remnants of foraminifera and coccolithophores, ancestors of the same microscopic creatures he’s been studying in his lab for three decades…

The scientist grows tearful – all this while
and without knowing, he has partaken
in an exuberant cosmic banquet, sharing
tea with organisms ordinarily held captive
beneath the lens in a dark and silent room.

He gulps with new and holy curiosity;
No more the tedium or dust of routine
scrutiny. He peers now through the poet’s lens,
all prior presumptions forgotten. 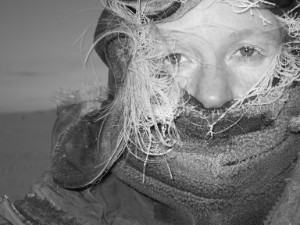 Claire Beynon is an artist, writer and independent researcher based in Dunedin, New Zealand. Drawn increasingly to interdisciplinary work, she has established valued collaborative partnerships with scientists, filmmakers, musicians, fellow artists and writers in her home country and abroad. Antarctica has her under its spell; two summer research seasons with US scientists (in a remote field camp on the edge of the Taylor Dry Valleys) significantly altered her way of seeing and being in the world. More on