This month, we bring interviews with this year’s NFFD judges. James Norcliffe sat down to talk to Siobhan Harvey, and Michelle Elvy talks with Lloyd Jones. We also bring you a discussion between the two youth judges, Gail Ingram and Eirlys Hunter.

On place and memory

Michelle Elvy: Your work seems to capture place – specifically, sensually, deeply. There’s Lower Hutt of Splinter (1988) – a ‘town of modest achievement’. Your award-winning 2007 novel Mr Pip comes to mind, too – as does your memoir, A History of Silence. Three different kinds of writing, with strong characters, yet place occupies centre stage. Does the landscape of a place matter as much as its people?

Lloyd Jones: With Splinter I think that was the case. I was fresh from studying ‘place in literature’ at a night class at New York University, and primed by the novels of Doctorow and William Kennedy. What Kennedy did with Albany and what Doctorow manages with Upstate New York (Loon Lake, etc.) I hoped to do with the Hutt. The narrator of that novel slips and comes to grief after a floor splinter pierces his finger – the splinter is also the history of place.

But that was then… I’ve changed my views about what story is, and where it comes from. Primacy of voice is what it is all about for me. A story is seldom born on the back of a view out the window. A voice has to be found to convey what is seen and what is felt. I never think ‘oh, that would make a good story.’ Well maybe I do, but it won’t be a story that I will write. For me, story begins with finding a voice I didn’t know I had in me. If I can stay with it, and hold my nerve, a world will grow around it.

ME: “Water has a memory.” You say this in a conversation with Peter Wells at the 2014 Auckland Writers Festival. What a fascinating connection. Can you elaborate on this theme?

LJ: It is a reference to the failure of the city-builders to completely drain the swamps on which the pre-earthquake city of Christchurch sat. To all appearances they were successful – for what met the naked eye were buildings, asphalt, parks, houses, power lines, etc. But it was cosmetic. The city foundations everyone assumed to be robust turned to water once the earth began to shake (a process called liquefaction). The past cannot be deleted or erased. It awaits its moment to sit and declare: Here I am. Where I always was.

ME: Can you share more about the title of your memoir: A History of Silence?

LJ: I grew up in a household where the past was barely ever referred to. I never once heard my father mention his mother or father. For that matter I never asked about them. Mum didn’t mention her father (she never met him) and said very little about her mother. Mum’s adopted parents were the only ‘grandparents’ spoken of, but then not often – both were dead by the time I came along. An ancestral past simply didn’t exist. We behaved as if we had been shipwrecked. No point dwelling on the ship lying on the bottom of the sea. Better to focus on the future and start building a life to get us there. It was a wilful silence – one I suspect is experienced by many Pākehā families – and that silence effectively stalled any proper understanding of our colonial history.

On writing inside and outside New Zealand

ME: You have also seen successes from your passion for sport: The Book of Fame was staged in 2003 by Wellington’s Downstage Theatre. Downstage director Murray Lynch said: ‘The Book of Fame is not just a play for lovers of rugby but a play essentially about friendship and loyalty. I believe it is set to enter the canon of New Zealand theatre where, like the All Blacks’ tour in 1905, it will form a landmark in our shared consciousness’ (quoted here). Can you talk a bit about that ‘shared consciousness’ and how it plays a role for you, as an author – whether novelist, memoirist or journalist?

LJ: By today’s standards it will seem a bit presumptuous of me to talk about ‘us’ as if the nation sprang from the same nervous system. But in 1905 we were more homogenous… suffered the usual colonial confusions about where ‘home’ might be. I like to think we came into our own consciousness during that All Black tour of 1905. It began with a journeying back to ‘home’ and then turned into a swerve away from. I think it is a better far healthier founding myth than the Gallipoli one we have pinched off the Australians. ‘We’ in the ‘Book of Fame’ narrative refers to both the team and the country. I would be reluctant to use the collective first person now. We’re a different population, more diverse, and cosmopolitan. When we look back to our origins we find ourselves gazing off in different directions – South East Asia, the Pacific, the UK, Netherlands, Australia, Canada, Argentina… Auckland’s population has something like 160 ethnicities… I have no idea what a ‘shared consciousness’ might look like now.

ME: You have spent time abroad: in France and in the US, and Germany, for example. Do you think travel and the experience of other places has influenced the way you examine your life as a New Zealand author? And what can you share about the line between the specific and the universal? Is there something specifically New Zealand about writers from here?

LJ: What has made me the writer I am? Other writers, writers from all over the world. All writers are cosmopolitan in that regard. We make our writer selves up from our reading. And, reading will make me the writer I will become in the future.

Writers create their own identity on the back of whoever they read and hold to be indispensable, however fleetingly (since writer crushes are notoriously fickle) – from Camus to Borges to Murnane to Beckett to Coetzee, Sherman Alexei, Kafka, to Chinua Achebe and Gao Xingjian, and Calvino, and Janet Frame and to all the marvellous mind -expanding translations of work around the world. Our reading creates the ‘writer part’ of us, our spine, if you like. Then we build from what is around us, what lies to hand. In which case, inevitably, the ‘sounds’ and the ‘view’ of NZ slips in… the piled driftwood on beaches, the stark hills, the shabby small towns, the shabby cities… all of that is us. The sea bounding in, the skies racing away. A healthy willingness to help a neighbour out – that’s us as well. Along with our sly prejudices and our tinny nationalism.

Were more of us to write in te reo Māori then, yes, I would be inclined to say there is something indisputably unique about our writing. But few of us do. Most of us write in English. For most writers, our first allegiance is to the form, and place grows out of voice.

ME: What other writers or thinkers have influenced your writing?

LJ: Too many to mention. But for a brief sample, see above

On short fiction and current reading

ME: You have written short stories as well as novels – Swimming to Australia and other stories, a collection from 1991, for example. Can you address the differences between short story writing and novel writing?

LJ: Different architecture, different ambitions. A short story is as tight as a drum.

ME: Short fiction allows fragmented telling. Which allows us to make connections or create disconnections in a manner that is not always tidy. What appeals about this kind of writing?

LJ: It frees writer and reader from the straight-lining of narrative which tends to close things down. You might think of narrative as whittling a log into shape – say that of a kiwi. The final thing betrays its origins; conventional narrative will not admit those shavings into the story of how it came to be. Discontinuous narrative claims those shavings… it just puts some space between them. It all belongs, in other words. The onus is placed on the reader to find the thread, and so a narrative is at work, but it is less hewn and more obviously a work in progress… It encourages inclusiveness and digression, and that always feels more real, more in keeping with true consciousness.

ME: And, following from that: What do you hope to see in this year’s NFFD competition entries? What do you think can be said in 300 words?

LJ: Anything at all. Anything is possible. Word length is obviously the constraint. But such constraints tend to make us more imaginative.

ME: Are there books you reach for time and again – are you an individual who re-reads, or are you always seeking something new?

LJ: I must admit I do tend to seek out the new and, in particular, translated literature. But, yes, there are certain authors I go back to. And sometimes if I am stuck in some way with what I am working on, I may go back to a writer who I remember having found a way forward on some particular thing. Sorry, that sounds a bit vague, but I wouldn’t want to be any more specific.

ME: What are you reading this year, and what do you recommend?

LJ: Like everyone else I know, I’ve read and enjoyed Lisa Halliday’s novel Asymmetry. I’m currently reading a critical work (one of the few, perhaps the only one) on John Berger whose novel G feels as groundbreaking now as it did when it won the Booker back in 1970. I like to read contemporary poetry. There’s a lot of good stuff coming out from a much younger generation in the US right now. But, I’ve gone back to an old hand, Robert Hass. Eileen Myles is another.

For a recommendation, Exploded View by Australian writer Carrie Tiffany (Text), due out in March.

More locally, I thought James Brown’s most recent collection Floods another chamber (VUP) was terrific. In fact, I would recommend writers considering the flash fiction format to take a look at Floods another chamber. They might also check out ‘The Fish’ by Elizabeth Bishop which is as much story as it is poem. For ‘storyish-poems’ I would add Jenny Bornholdt, Vincent O’Sullivan, Bill Manhire and Tusiata Avia to that list. A final point – story does not have to be ‘made up’. Flash fiction writers might benefit from taking a look at Damien Wilkins’s True Stories. Also, but for different reasons, Janet Frame’s story ‘Reservoir,’ specifically the section which wraps up a reservoir of the young narrator’s fears.

ME: Do you have a favourite colour?

ME: Would you favour an entry that had ‘blue’ in the title?

LJ: I like to think I wouldn’t, but, on reflection, yes, I probably would.

ME: Have you ever fallen off a horse?

LJ: Yes. Many times. Writers have to get used to that. 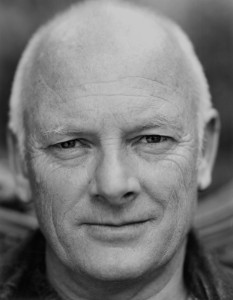 Lloyd Jones is a Wellington-based writer. His books include: This House has three walls (Victoria University Press, 1997), The Book of Fame (Penguin, 2014), Hand me down world (Penguin, 2011), the Man Booker shortlisted novel and winner of the Commonwealth Writers prize, Mr Pip (Penguin, 2007), and a memoir, A History of Silence (Penguin, 2013). His most recent book is a novel, The Cage (Penguin RandomHouse, 2018).