Flash Frontier: Welcome, Vivienne – and thank you for taking the time to speak with us for this special edition of Flash Frontier celebrating the city of Berlin!

Let’s begin with your Berlin project from 2017. You shared with Creative NZ: “My mother lived and worked in Nürnberg from 1936, later marrying a (first) husband, a marriage she kept concealed her entire life. So, was she a bigamist? And what were her politics? Who exactly was this man she married? Through my research I have unearthed some extremely potent facts.” Can you tell us about the genesis of this project, and how going to Berlin impacted your view of how you examine family history in your own creative process? 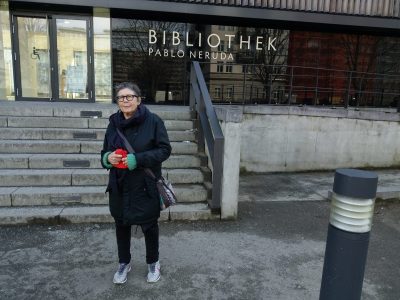 Vivienne Plumb: In 2017 I was thrilled to be given the 2018 Creative New Zealand Berlin Writing Residency. The whakapapa of my Berlin writing project goes back many years.

In 1935, at the age of twenty-four years, a New Zealand woman by the name of Isabel H. travelled by herself from Wellington to Europe. She worked in London then holidayed in Toledo in Spain shortly before the Spanish Civil War. She arrived in Berlin in time for the 1936 Olympic Games, and acquired a position working for a well-off family in Nürnberg. Later, she was even in London for the coronation celebrations of George VI. But she was an ordinary young woman who just happened to be present at many historical events of that time, and in 1937 she married, in Europe.

Seven years on and back in the Antipodes, she married once again. The questions being: did she ever divorce that first husband, why wasn’t she with him any longer, and who exactly was he, and what had been his politics? Isabel kept the marriage concealed from her second spouse’s family, and from her three children. She sometimes spoke German to these children but they never understood what she was saying. She was a woman who maintained that truth and honesty were the most important attributes and yet her own life contained concealment and erasure. I am the third and last child of Isabel H., and I hope to be able to tell her story.

The 2018 Creative New Zealand Writing Residency was a real boon for me, enabling me to access information, to research, and to visualise and understand important aspects of Isabel’s story. While growing up, I had been aware that my mother had travelled overseas and had worked in Germany but I was too young to understand the politics of that period – 1936 pre-war Nazi Germany – or to grasp the importance of the fact that she had worked in Nürnberg, the city that the Nazis (or National Socialists) chose to hold their annual political rallies.
It was only after I discovered through my eldest sister that Isabel had married in Europe, that I began to feel I would like to know more, and decided to investigate further, to attempt to discover the truth. This was the genesis of my Berlin project.

FF: The Berlin residency is unlike the others in that it required you to live in a place with a new language. How did being surrounded by the German language change your view on being there, and how did the language impact your own ideas around your project?

VP: The actual residency is a one-bedroom apartment in what used to be East Berlin and includes central heating (the temperature went down to -12 during the winter months), and a stipend which covers your airfares, your travel and health insurance for the time you are there, and your German visa fee, besides a minimum amount to live off while you are on the residency. (Residents must also pay landline phone, broadband, and electricity in the apartment.) I applaud Creative New Zealand for continuing to offer such a terrific opportunity, which goes to a New Zealand writer every second year, and to a New Zealand visual artist every other year.

The area where the apartment is situated contains a lot of history. In the 1920s this suburb was extremely poor. Alfred Döblin, a doctor working in this part of the city, on Frankfurter Allee, wrote what became a Berlin classic, Berlin Alexanderplatz, loaded with the social politics of that era. During World War II these poverty-stricken suburbs were badly bombed, and after the war the new government of East Berlin embarked on a massive building program. What was Stalinallee and is now Karl Marx Allee, became an enormous construction site between 1950 – 1953, the Allee being an extremely wide boulevard (good for political parades), stretching from Alexanderplatz to Frankfurter Tor. The apartment blocks that were built on either side look monumental and impressive, symbolizing the ideological policies of the then East Berlin. The Berlin wall finally came down in 1989, and Germany was unified, since then the cheaper rents of this side of the city has attracted many families with young children.

FF: Did you have favourite phrases or ideas or places that crept under your skin? If so, can you share a bit?

VP: The sheer inspiration of being in Berlin – a city with a fascinating and sometimes scary history – made for an exciting time while I researched and worked on the creative nonfiction text. Berlin is a crazy place, heavily graffitied, and the residents equally heavily tattooed. Let’s not forget this is the city where the seamless condom was invented, and I’m sure that the vegan sex shop I saw in Kreuzbrg must be the only one in the world. Berliners are also famous for their ‘Berliner Schnauze’ (like the ‘snout’ or ‘snarl’ of a dog), which refers to their sassy attitude and sharp sense of humour.

FF: Besides being a poet and accomplished storyteller, you area also a playwright. How do you navigate the lines between these different genres? Do you find the lines are blurred, or are they clear for you?

VP: What I have been working on has been a new area for me: a mixture of memoir and fact, a kind of creative nonfiction text. Previously, I have written short fiction, a novella, a novel, poetry and prose poems, and stage plays. I am often asked how I navigate the lines between these different genres, and my answer would be that I enjoy moving between them, and that one seems to feed into another.

For instance, after writing a short story, The Wife Who Spoke Japanese In Her Sleep, which became popular earlier in my writing career, I was later asked to adapt this into a script for the stage for the Auckland Theatre Company. It was a challenge that was interesting and fun. The resulting play stands apart from the original story and yet retains the dry, comedic aspect of the story, emphasized more for the stage play. I would also like to transform my novella, The Diary as a Positive in Female Adult Behaviour, into a one-woman stage piece. Moving between these genres feels fluid to me. Writing challenges help you to learn more about your own work. I only started writing in my early 40s and enjoy trying anything new. In 2020, my play, The Cape, originally written for four young males, will be performed with an all-female cast.

FF: Did you discover more about your mother, or Germany, or yourself, while you were there? Did you find yourself navigating the line between truth and creative nonfiction, and was that a difficult space to work in?

Viv Plumb with her Polish translator, Wioletta Perzanowska, in Krakow

VP: I can definitely say that during the course of my research, I have discovered enough about my mother to easily fill a book. Unfortunately, I am unable to reveal any of the fascinating information I have unearthed, as that would be giving too much away.

At the same time, my journey of discovery has entailed not only travel to Germany, and research but I also learnt German, which became an important part of the entire project. Isabel had learnt the language also, while she was working in Nürnberg, and it sometimes seemed as if we were both travelling along a similar pathway, although I began learning Deutsch at the Goethe Institut in Wellington and continued with an eight-week immersive language course in southern Germany. Now, I cannot possibly imagine the project without the influence that the language has given to it. Language is a window into any culture, and learning a new language can broaden and exercise the mind.

FF: The Berlin residency is unlike the others you’ve held in that it required you to live in a place with a new language. How did being surrounded by the German language change your view on being there, and how did the language impact your own ideas around your project?

VP: While on the residency in Berlin, I enjoyed being surrounded by spoken Deutsch as it added an extra depth to the process of creating Isabel’s story. Though, at the beginning of summer I took the train to Florence in Italy, where a launch was to take place of the (published) translation of my collection of writing, As Much Gold as an Ass Could Carry (2017), and arriving in Turin (in order to change trains), I was overcome by the bright clothes the Italians were wearing and their expressive way of speaking with their hands, their faces, and their tone. It was so different from the Germans, who prefer to wear dark clothing and tend to talk without moving their bodies or hands.

If you want a reaction from a German give them the correct money at the market or at the shop till, and they will demonstrate a moment of Deutsch happiness (they still use cash a lot). They have strong beliefs surrounding thriftiness and the concept of saving. It was during Isabel’s time living in Germany that she became die praktiche Hausfrau (the thrifty housewife), something she was proud about for the rest of her life. Being in Germany helped me to understand these things about her, to understand how Deutsch she had become, and I had the spooky feeling of walking in her footsteps.

← In Conversation: Guest Editors Zana Bell and Gill Stewart Philip Temple: Berlin poems from the past →