Iona Winter: On the road with her new book, Gaps in the Light 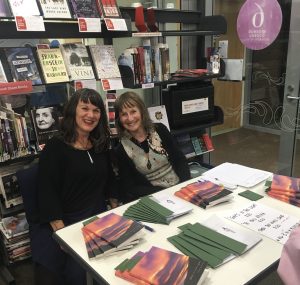 Āe a new pukapuka, and after a slight hitch involving an ambulance and surgery, we headed off on the road with her around Aotearoa in April.

Gaps in the Light (GITL) came about after working on a novella-in-flash for the Bath Novella in Flash Award. It wasn’t coming together, but after sleeping on it numerous times, I figured why not create another collection. I completed the manuscript on the morning of September 17th, 2020; that afternoon I learned that my beautiful tama Reuben had died.

About five weeks after Reuben’s tangi, I had a little bird in my ear telling me to ask a close friend to read the manuscript. She replied quickly telling me that I had to ‘get it out in the world’. I approached Ad Hoc Fiction (home of the Bath Flash Fiction Award, Short Story Award, Novella in Flash Award) in the UK, because I’ve found that Aotearoa publishers are not on the short form fiction waka yet, and as much of my mahi has been published overseas it felt like the right thing to do. After 72 hours they replied saying they’d love to publish it. 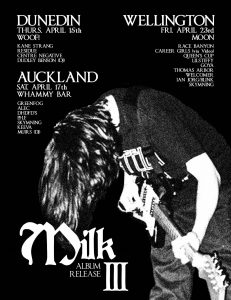 Along this same timeline, I contacted a friend in the music industry who had always been staunchly supportive of Reuben’s creativity throughout his career. I strongly felt that we needed to get his completed album Milk III out in the world too. Flying Nun picked it up (seeing immediately what an epic album it is), and so GITL and Milk III toured together during April throughout Aotearoa. Intuitively it was tika for Reuben and I do this together, and I’m sure he had something to do with the timing of it all – magic fulla that he was!

I learned some years back, that writing short form is what I am good at (after writing a novel for my MCW that now languishes in a cobwebbed box). Tina Makereti mentored me through an NZSA Mentorship in 2015 and it was then that it became clear my strengths lie in this area. That said, I resist pigeonholing my mahi, because it comes from an intuitive place which can shape-shift between poetry and prose, or be a combo of both. In more recent times, it seems there is more hybridity to my work with the inclusion of non-fiction components and multimedia collaborations with other artists.

Reuben was a prolific musician from the time he picked up a guitar at primary school and taught himself how to play. He performed regularly from age 12 until he died at 26 – released countless albums, played with numerous bands, and supported other musos unconditionally. His capacity for aroha was phenomenal, and he had an incredibly expansive creative mind, despite struggling with chronic pain from fibromyalgia for the last decade of his life. Pain was a constant (yet often invisible to others) feature in Reuben’s world, it affected his life dreadfully. And so, the Milk III album release proceeds are being split with Fibromyalgia Aotearoa NZ, and the future fund for other Reuben-related projects, in order to both raise awareness of this complex illness and support others like my tama. https://flyingout.co.nz/products/milk-iii 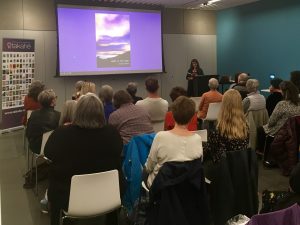 The shows and book launches were incredible. I was overwhelmed throughout, and a bittersweet melange of emotions encircled me every day. People stunned me with their loving generosity and feedback, people I didn’t know but who knew me through Reuben and vice versa. I met people I’d only ever engaged with online – such is the world we inhabit these days – and it was gorgeous to do so. My preference is always kanohi ki te kanohi, and I am aware of how privileged we are in Aotearoa to be able to move around with relative freedom (when other countries cannot). Massive thank you to Kath Dewar, Helen Lehndorf, Pip Adam, Nod Ghosh and Kirstie McKinnon for their support with launching GITL, prior to and post publication – their introductions at events moved me deeply. To all the venues, performers, supporters and my whānau of choice, kā mihi aroha ki a koutou.

A selected story from the collection, first published by Reflex Fiction

The bus glides over bitumen highways, and I think of spindrift strung together on stems, like saliva. Beside the road, on land scraped back to clay, ancient trees once stood. Does the earth remember lost symphonies of sound, within her deep valleys?

Undeterred, the child drags their nose down the glass pig-nose-style, hands spread wide, each fingernail glazed a different colour — resplendent.

Before I left you, I dreamt of a place where all the rivers converged. Everyone we knew, or are yet to know, was there. The water held our histories, and our futures — infinite possibilities. Waterfalls, ancestor pools, and surging rapids lay deep in the reflective skies.

My heart attuned to a warbler’s song, and when I felt the earth’s pain my legs trembled. The quiver of my chin matched the ancestors, regardless of my skin tone. And my shaking hands told me all there was to know about who I am. ‘This is the place of your people,’ they crooned.

I saw how every event was a precursor for another. Day turned to night, light sieved the trees, and the moon emerged pale on the horizon. Like the stars hanging low, I knew my place. Then it became so cold spiders took to crafting their webs close to the ground, but the earth still held warmth between my bare feet and her skin.

I’m returning to a city filled with earthquake-rubble-mounds, where bedraggled orange flags flap in the breeze. In transient marketplaces, mad men will pound out their sonatas on tin whistles. And high above them, a woman’s spray-painted face remains watchful, over the stones.

It makes me laugh, how we have treated our mother like shit for eons and nowadays can’t stop complaining because she’s finally retaliating. I always knew violating her would have consequences.

Some damage is irreparable — like the breath of a furious wind upon fragile saplings, or splinters beneath my nails marking out dark channels. 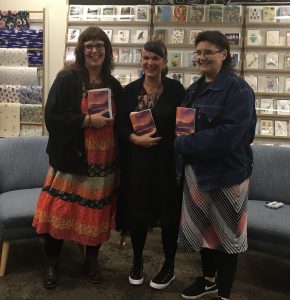 Find Gaps in the Light at Ad Hoc Fiction. 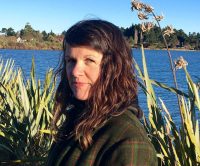 Iona Winter (Waitaha/Pākehā) lives in Ōtepoti Dunedin. Published and anthologised in Aotearoa and internationally, she writes in hybrid forms that explore the spaces between poetry and prose. Her debut collection of poetry, flash fiction and short stories, Then the wind came, was published in 2018 (Steele Roberts Aotearoa). Shortlisted in 2018 for the Bath Novella-in-Flash Award, she has read her work at the Edinburgh International Book Festival, and won the Headland Frontier Prize in 2016. She is currently working on a poetry manuscript, and a collaborative project with sonic and visual artists.

← Piet Nieuwland, with a new book and art exhibit Kōrero: Vaughan Rapatahana and Jack Remiel Cottrell, with his new book →