Jeremy Roberts: On character, language and telling a Kiwi story

This month, we caught up with Napier poet Jeremy Roberts to talk about character-building (in story and real life / in general and during Lockdown) and his approach to prose and poetry. First, a new story…

Powderham was straight up and hardly ever down. He’d wrap his laughing gear around life, most days. You bet he could suss out a damn vibe. He was asap, too. When he took the car-keys off a shitfaced mate, the neighbourhood blurted: You’re a legend! – just like the bloody billboard. Another time he prevented a decent bloke getting a good kicking. Oh, the locals were always causing a stink during the cold, misty months – but they’ll be dancing in the summer, he told himself. He liked to say that everyone should give up the smokes, stop robbing dairies and eat a good brekkie. Go for a run up that damn mountain, why don’t cha? As for dak and P – why choose a munted life? With a belly full of chicken nuggets, he could always handle the jandal. Licking the fat off his fingers was sweet as! His aunty – who knew how to disconnect a power meter and never liked anything that sounded like a permanent care arrangement, thought Powderham was a little shit. But she had nothing on him and was furious that he wasn’t just another loser in the family. Her best idea was to walk into the ocean and say – to hell with everyone! He was sad she carked it, but she was an egg. Powderham’s ‘Work and Income’ case manager reckoned he was a good little bugger. It was hard yakka getting a job and he never told any pharkin’ furphies. He never got on the turps. He never knocked up any horny birds. He never packed a sad. Powderham loved listening to radio waves. Sometimes he stood on street corners impersonating T Rex. He never even asked for a fiver. Powderham was good at waiting. He never even wondered: Where’s my solid gold easy action?

Michelle Elvy: This story opens with a wonderful line – Powderham was straight up and hardly ever down – which gives a kind of lift to the story, and carries the mood through the whole story. Can you talk a bit about this line, and how it came to you? How did this character arrive?

Jeremy Roberts: Thank you for that! I guess I wasn’t looking for a slow build 😉 This piece (which was originally conceived as a ‘poem’) is very much concerned with character. I was visiting New Plymouth a few years ago and saw a street sign – ‘Powderham Street’. It always stuck in my mind, as a word that suggested a few things, or at least made me think of the many forms of powder (including gunpowder). In order to reduce something to powder, you have to crush or beat or grind it. On a deeper level this concept relates to Powderham’s resilience and what he could have succumbed to. ‘Ham’ obviously suggests many things. I like to think that it prompts the questions: Is he just acting? Is he for real? Although he is meant to be solid, reliable.

Actually, there was another street too, nearby, called ‘Wrantage’ Street’. I immediately combined them and thought it would make an interesting name for somebody – Powderham Wrantage. The ‘poem’ was originally called that. To me, the word ‘wrantage’ suggested a damaged, ‘munted’ life.

The main motivation for trying to write this was the fact that I have been working for the last two years in a very rewarding voluntary advocate role, helping beneficiaries sort out often complex problems with Work & Income, including people who are ‘down and out’. Since we hear so many negative comments in the media about beneficiaries (from talk-back callers to senior politicians – even in the time of Covid-19!) I wanted to write something that stood against this often inaccurate mantra. 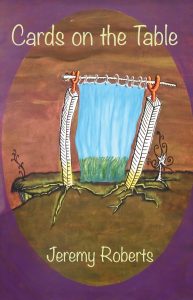 ME: We notice you rely on the vernacular – a casual easy-going style to write about this character. Do you think writing about Powderham had to be language-driven, to get him right? How do you go about capturing a whole character in a small space?

JR: Yes – language driven, including some Kiwi classic phrases and references, e.g., the title. NZ/Aotearoa has some very cool slang/street expressions. Powderham has lived a particular life – a small NZ city life, maybe New Plymouth, as a long-term beneficiary. There was originally a reference to Mt Taranaki in early drafts. In fact, Taranaki spoke to Powderham and told him that something was coming: a boom-room in the doom-room. Perhaps it is a risk making so many statements about a character in single stanza/poem – the male pronoun ‘he’ features maybe 15 times, but this became the glue/structure. I would like to use this approach again. A whole character in a small space – I crammed that space with info! I would hope that non-Kiwis would be puzzled by some of the phrases.

ME: The story is wacky fun for our times (Sometimes he stood on street corners impersonating T Rex) – and also quite positive. Powderham is, to summarise, a Generally Good Guy. Is Powderham a character who inhabits other of your works, and are there themes here that you explore elsewhere? Is there some kind of message here?

JR: No, this character has not appeared before. He is a new composite drawn from direct experience and observation. I’m glad that fun aspect comes through! I once met a woman who did know how to disconnect her power meter. Her rebellion and desperate strategy to make ends meet. I would say yes: there is a message intended. Over to the reader!

ME: It feels like a quintessentially New Zealand story. I keep coming back to lines like this, about Powderham’s aunty: Her best idea was to walk into the ocean and say – to hell with everyone! Do you think it’s specifically a NZ story – and why?

JR: This is a Kiwi story all the way – a mix of serious and humorous Kiwi content. In terms of Powderham’s aunty, some people in our society are defeated, angry and too far down the line. But there are also people strong enough – with genuine character – to avoid being a victim all their life. I’ve known such people. The ‘good Kiwi’ persona comes into play here, in the guise of Powderham. I’ve written about suicide before a few times, have known a few folk who took that final step. The ‘bottom rung’ makes for good characters. Not everybody wants to go there, writers included.

ME: Your background is mainly poetry. How do you move back and forth between poetry and small fictions?

JR: It’s all a bit mixed up a bit these days, but if I had to describe my role, I would say ‘poet’. It’s all just ‘writing’ really. I always think of Lawrence Ferlinghetti’s statement about modern poetry being ‘prose in the typography of poetry’. It’s true – you could simply remove the line breaks from many poets’ work, add any missing punctuation, and there it is: prose. All the words are there. But the way poetry looks on the page is still very important. Often, I will play about with the layout – ‘Legend’ had several different layout attempts. I suppose some things just cry out to be filtered through a particular medium.

ME: What are you working on now – and how to do you see your writing community developing during Lockdown? 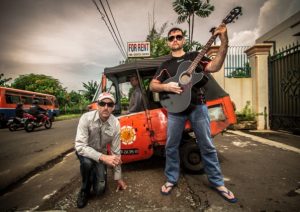 JR: Lockdown has meant our two local poetry groups in Hawke’s Bay are having monthly collections assembled and emailed – online ‘meetings’, as most groups around the world are doing. So, it will all continue, but people now have the chance to read and study poems that otherwise they would have listened to at the open-mic and most probably forgotten – at best, partly remembered. That is the thing about live poetry meetings – all those words go by so fast. Too fast, really.

I am getting deeply involved in a long piece of work (70-80k words?) – a book, really, about my experiences in Jakarta, Indonesia, which included forming a poetry duo with a guitarist from Manchester-Middleton, UK. We were called ‘The Bajaj Boys’ and we played live and made many recordings. The book will tell the story of our creative endeavours but will also present a lot of material about Indonesian society and expat life in a very interesting (Islamic) city. It’s called ‘The Dark Cracks of Kemang’ and will contain both prose and poetry. I’m also trying to find a guitarist for a new combo that I want to call ‘Napier Hobos’. I’ve always loved the word ‘hobo’ and its origins – being derived from ‘homeward bound’.

I’m also working on new poetry videos which can be seen on my YouTube channel. There are audio recordings on Soundcloud. So, really, just working hard, keeping those imaginative pathways open – commenting, maybe even trying to subvert conventional points of view. But I always remember my old art teacher saying: “If I’m going to put my work up on a gallery wall, I ain’t putting up rubbish. It’ll be my best work!”

Jeremy Roberts is a resident of Napier, New Zealand, where he MC’s at Napier Live Poets, and contributes to Hawke’s Bay Live Poets. He has appeared at poetry events in many locations, including being an MC at Auckland’s Poetry Live, and currently interviews poets on Radio Kidnappers. He has made neon lights, children’s puzzles, and has been a primary school teacher and a visual artist. Jeremy’s work has been published in a wide range of journals – including NZ Listener, Landfall, takahē, JAAM, Poetry NZ, and Phantom Billstickers. He is also a poetry book reviewer. His first poetry collection was Idiot Dawn, consisting of poems written in the 1980s. His collection, Cards on the Table (IP Australia 2015), gained this note by NZ Poet Laureate C. K. Stead: “I enjoy it all and find a lot to admire.”

Jeremy has performed and recorded poems with musicians in NZ, Texas, Saigon, and Jakarta. In his late teens he discovered Ferlinghetti and the Beats, Blake, Keats, Coleridge, and Sylvia Plath, while studying at the University of Auckland. The earliest live poetry performances he saw were by Kiwi poets Kendrick Smithyman and Gary McCormick, and the first Kiwi poetry collection he owned was by Sam Hunt.