Flash Frontier: You studied Antarctic Studies at University of Canterbury. How did you become interested in this as a field of study?

Alison Glenny: Kia ora Michelle, thank you for inviting me to be part of this issue of Flash Frontier. To respond to your question, Antarctica has been a growing interest of mine for quite some time. I’m not sure where it started, although I can remember being told about Scott and Amundsen at primary school. Perhaps it’s common for New Zealanders to feel a connection to Antarctica, because for many of the Heroic Age expeditions New Zealand ports were their point of departure for the ice. I can also remember the first time I encountered snow – on a trip to Porter’s Pass when I was very small. I insisted on trying to eat it.

FF: How did you move into poetry from this course of study? What captured your imagination that led to the connection between Antarctica and the poet’s voice?

AG: Ice (naturally!) The way the crystal structure absorbs light from the red end of the spectrum, creating blue depths. It’s ability to be sculpted – water and air you can cut into blocks and build with. The vastness of the ice shelf and the clearness of the air. Brightness, and the endless daylight of summer. Emerging from a tent each morning to see Mount Erebus. Weddell seals popping up from tidal cracks or hauled out on the ice, at home in below zero temperatures. A silence that acts as a sounding board for your own thoughts. The different ways in which people have written about Antarctica. The often compelling accounts by the Heroic Age explorers who were the first to encounter this extreme environment and who described their attempts and sometimes their failure to survive in it. Scientific writing on Antarctica which adds its own specialised vocabularies and scrutiny through a range of lenses.

FF: Much of your book feels like prose. Can you talk about the line between prose and poetry, and where/ whether it exists for you? And whether it matters, to you? 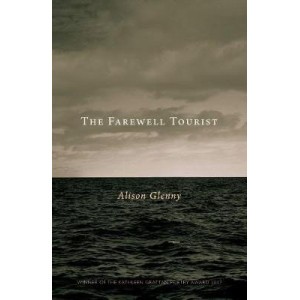 AG: I imagine that everyone involved in the writing process – publishers, readers, critics, authors themselves – would have a different answer to those questions. Certainly a lot of ink has been spilled trying to map the ‘line’ that you refer to. It’s common to think of fiction as centred on narrative and poems as oriented towards lyric, but there is a lot of in-between. Personally, I enjoy hybrid forms without being too concerned about what category they belong to. I’m also drawn to writing that uses forms – like footnotes or dictionary definitions – in ways that run contrary to their usual purpose. I usually describe The Farewell Tourist as a collection of prose fragments.

FF: Bill Manhire has said your collection “pushes against the boundaries of what poetry might be”. Did you feel boundaries breaking down as you were experiencing Antarctica, and writing about it?

AG: I think that people who visit Antarctica, or even engage with it imaginatively, tend to respond to its difference from other places. That response often includes a desire to defend it, and advocate on its behalf. Antarctica has traditionally been seen as a place apart, not just geographically but also temporally, as if there were an invisible boundary separating it from the rest of the world. That’s not true – we know that we are changing Antarctica greatly through global warming, and those changes will certainly affect us. That’s probably the boundary I was most aware of being broken down.

FF: The book consists of three experimental parts: the first about a relationship and the vast space inside and outside these people; the second is an extraordinary commentary on what is said and what is not said; the final is correspondence, in fragments. Themes of absence, silence, space and longing which move from the personal to the universal. Can you provide three excerpts (one from each section) for our readers and tell us a bit about each one (a brief commentary – your own thoughts about crafting, or what inspired the section, or themes explored, or … whatever you like).

AG: I would say that the different parts are motivated by the same basic idea or feeling. Mainly, a sense of the strangeness of living at a time in which our relationships with others – including or especially non-human others – are strained to the point of extinction. I’m not a scientist, and I can’t write usefully about many aspects of the Anthropocene. The likely effects of a certain degree of warming, for instance, or the parts of the world that are vanishing and the species that are going extinct. I can only write about the way these disappearances make me feel, and hope that something of that feeling is communicated to others.

AG: Ngā mihi Michelle, thank you for having me!

from The Magnetic Process

She dreamed she was on a ship that was sinking. Looking
overboard, she could see the gleaming surface of the
iceberg, feel the cold water rise above her ankles. But she
was seated with the violins and preoccupied by details; the
amount of rosin on her bow, a false note from the
woodwind, and the frayed portion of sleeve at her wrist –
did it show? The damp patches in the conductor’s armpits
as he raised his arms to draw out the rising swell of sound.
The luminous points of his white collar. On waking, she
asked herself why she didn’t try to reach the lifeboats. Her
friend told her the answer, you didn’t want to interrupt the
music.

Erasure (noun)
1. An act or instance of erasing. 2. The removal of all traces of something: obliteration. 3. The state of having been erased; total blankness. 4. The place or mark, as on a piece of paper, where something has been erased. There were several erasures on the paper. 5. Crossing out, striking out, blotting out, effacement, expunging. 6. A tendency to ignore or conceal an element of society. 7. Removing something in order to reveal another; for example, the discovery that the beloved has been replaced by a set of measurements. 8. The practice of concealing part of a poem by covering it with snow.

from Footnotes to The Heroic Age

1. He declared his intention of taking the ponies, five dozen sled dogs, and “a motor car for use wherever there are no mountains”.

2. Each of his letters was a tiny museum, a footnote to an imaginary novel. “I searched the box of negatives to discover the keepsakes, but they had vanished in the silence of the crevasses.”

3. Despite their efforts, the snow came inside. Each day they used the wing of a giant storm petrel to sweep it out again.

4. She had placed the instrument in the snow outside her bedroom window. The crossed lenses revealed the inner stress, the point of inevitable fracture.

7. She dreamed the winter was a little cabinet. When she unlocked it, she discovered a small white dog.

17. The cinematograph film showed a man emerging from a tent and disappearing. At that point the images ceased and the only sound was the whirring of the projector.

You are twisted into my being

[The remainder of the letter is missing] 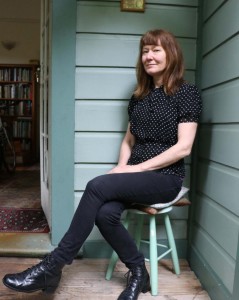 Alison Glenny was born in Ōtautahi/Christchurch, and currently lives in Paekākāriki, on the Kāpiti Coast. She holds an MA in Creative Writing from Victoria University Wellington, and a postgraduate certificate in Antarctic Studies from the University of Canterbury. She has taught creative writing at Whitireia Polytechnic, and published short fiction and creative nonfiction. She currently works in the area of public housing. Her book The Farewell Tourist won the 2017 Kathleen Grattan Award for Poetry and was published by Otago University Press.