Millennia of silence and no rain

It’s in Antarctica, it’s in the lovely Chapel of the Snows. Outside there’s Roll Cage Mary
braced against the katabatic winds that swing down from Hell’s mountain. Outside are the
glamorous ice meadows. Inside there’s a young woman wandering around in her socks.
I spend a long time looking at her looking a long time at the stained glass window behind
the altar, the little adèlie penguin, the wheat, the host, the wine cup. So, we’re both curious.
It turns out she’s Korean, a science technician with poor English. She works with weather
balloons, translating the news from the galaxy. I’m wondering if she writes it in Korean
but maybe it’s just numbers. I tell her I was up until a month ago a Latin teacher. I have
this she says and she hands me a piece of paper. The writing on it is very very small and I
haven’t got my glasses with me so I ask her to spell out the words and I write them down
in big crude letters on a page torn from my notebook VOCO TERMINIUM TUM ERIT.
She smiles when I translate it I say it is the end and then it will really be the end. She wants to know
if the Latin is correct. So then I have this weird thought that she hasn’t just copied it
out, she’s actually made it up. I remove the second ‘i’ from terminium, now it’s correct.
Here I am at the end of the world giving a Latin lesson to a young Korean who’s got very
poor English and all the time I’m getting more and more anxious, frantic in fact. What if
it’s a suicide note, what if I’m meant to be doing something?

So once again we’re back in the corridor at Scott Base and a bright young chap from
the Air Force is showing us around the place, funny how it all looks the same, the
sloping bits of brown flooring, the hooks along either side, the blue ECW’s and yellow
wind jackets hooked up over blue mukluks and fawn sorrels. And we keep returning
to it, to the corridor, the tube that joins up all the huts, the bit that Sir Ed apparently
thoroughly disapproved of, saying it was for softies, the one that’s kept at 18 degrees
no matter what and every kink and bend in it looks the same, the same yellow wind
jackets and blue ECW’s hooked up (or did I say that before) and underneath each a pair
of mukluks, none of these being ever allowed in the mess or Geoff the Chef will have
your guts for garters, and I’m thinking (thinking) trying to remember (to remember) as
all the nooks and crannies are unveiled just where the hell are we and at one point we
come out into the corridor yet again and I say hey, that looks like our door and Kirsten
says yes, that’s our door and although at times I despair of prose writers and maybe even
photographers as to whether they get figurative language (Kirsten by the way is a jeweller)
I must say I was heartened and I laughed delightedly at the repetition and I tossed the ball
right back to her GLEEFULLY you might say and I said ‘yes, that’s our door’ and she
looked at me a bit harder and she said a little more firmly this time ‘that is our door, Bernie’
and I hesitated for a moment because all of a sudden I was bewildered, what exactly did
she mean and once again I found myself to be in one place and in another at the same time
which is not altogether unfamiliar and never quite comfortable, I mean I’m quite happy
to be there on my own but in company you do begin to feel like a bit of a fool as if
everyone else is in the know and you are even more bewildered than before so there I
was muttering softly ‘our door’ just testing it out and she picked it up and spoke to me
with much patience and an unquestionable fondness ‘Yes, Bernie, if you go over and
open that door, Bernie’s little boots will be beside the bed and Bernie’s little jacket will
be hanging on a hook and Bernie’s little book, poems by Wallace Stevens if I remember
correctly, will be lying on the bed’ and my whole body clenched with the maddest laughter,
with utter in fact DELIGHT because this was one of the best jokes ever and honestly, I had
absolutely no idea, not even an inkling.

I went to Antarctica at the end of 2004, sharing an Artists’ Award with my friend, the Dunedin painter, Kathryn Madill. The two weeks spent on The Ice were a turning point for both of us. On my return I took early retirement from high school teaching and turned to a writing life. There was something quintessential about being at the bottom of the world, outside the usual run of things, outside all the noise. I stood in that hazardous, beautiful space where few women had been, startlingly aware of the smallness of my being, and of fugacity, the fleetingness of things, as the poet, Ursula Bethell, described it, she buried in the Rangiora cemetery on my doorstep.

The whole experience, only two weeks long, was a strange mixture for me, part Boy Scout camp and part what I can only call a spiritual space, a nothingness that expanded an awareness in me, filled me with amazement and gratitude. I was alive. I had been gifted with life. And life is precious.

The details in both these stories are absolutely true. Both were published nine years after the events described. I’m sure I told the basics many times as yarns when asked about my Antarctic adventures in those intervening years. But a deeper awareness lay under the surface, something to do with paranoia and shame, perhaps. What if I lost the ability to read my world? How are we to save ourselves or anyone else in this life? Perhaps it was some kind of existential heaviness that shifted words, eventually, from yarn to prose, words on a page. And then there’s poetry.

On my return to ‘civilisation’ in 2004, I saw Antarctica in all kinds of places. In the way waves fell on our beach, in the movement of clouds. Then there were the deaths, on the news, among friends. In July 2005, my much loved niece, Shelley Mather, was killed in the London bombings. In early 2006 I wrote the following lines as I looked out towards Petone from Connaught Terrace in Brooklyn, Wellington. ‘Campfires flicker in the night, ice masks the harbour. / I’ve made up my mind at last, I’m going to walk across / to see the others. We can sit down then / and talk about poetry, the way ‘water’ chimes / with ‘daughter’ and is there any news of her yet.’ Antarctica gave me the imaginative connections, and I am ever grateful. 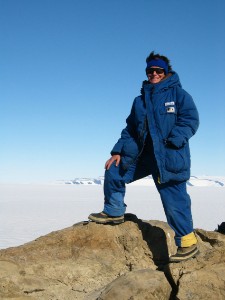 Bernadette Hall was the 1996 Burns Fellow at Otago University and in 2004 shared an Artists in Antarctica Fellowship with friend and collaborator, Dunedin artist Kathryn Madill. The author of over nine poetry collections, her work has been published in a range of national and international anthologies. Hall was the 2006 Victoria University Writer in Residence and in 2007 held the Rathcoola Residency in Donoughmore, Ireland. She was awarded the Prime Minister’s Award for Literary Achievement in Poetry in 2015. In 2016 she released Maukatere: Floating Mountain, a single long poem sequence.