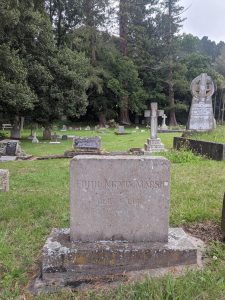 Dame Ngaio Marsh is buried in the Acland family church yard at Mount Peel’s Church of the Holy Innocents.

The South Island Writers’ Association (SIWA) is an Ōtautahi based writing group. Established in 1963, SIWA was originally called the ‘Christchurch Writers’ Circle’ with Dame Ngaio Marsh as the patron.

They promote and run a number of literary competitions and events to foster the art of writing in New Zealand. Past and present members have published novels, short story and poetry collections, and have been represented in national and international publications and competitions, including regular contributions to Flash Frontier.

Below we feature some SIWA members’ stories and their inspirations and thoughts about being a member of SIWA.

Dusk is falling. Although the wind is cold on her wrists, she is grateful. She feels like she is in a film: the wind in her hair, the car long, gleaming under the streetlights. She does not know which way to turn. She is soothed by the cooling smell of evening air, the day fading to monochrome. If she were a photographer she would work in black and white.

Venus shines bright in the south-west over the city. She turns the big steering wheel toward the last of the evening light.

Her mind replays the man turning his head, her shoe slipping away. Her clarity of mind gives way to foggy exhaustion; she cannot drive. At the edge of town, she sees a figure sitting on a bag at a service station. She pulls up beside it. She looks down on a huge head of sun-bleached, matted hair. Hairy, tree-like legs protrude from faded work shorts and end in working boots. She glances at her stilettos in the floor well.

Hey! Dude? Anyone in there? He looks up. She locates his dark eyes amongst a mass of bushy beard and eyebrows.

The eyes are suddenly hopeful. I’ve been here all afternoon. He stands, towering over her.

Wow. You do look kind of scary – from a distance, I mean. Where’re you heading? He names some place.

She shrugs. You know how to get there?

Let’s go there then. You reckon you could drive this thing?

No probs? She sighs and slides across to the passenger seat. Hop in then. Try not to talk like that. She is about to tell him not to get any ideas, okay, but changes her mind. It seems unnecessary.

I wrote the “Šiduri’s Watercress Salad” specifically for NZ NFFD day as a first attempt at a scene I had in mind to occur later in a novel that I have started. So I already had backstories for Samantha and Šiduri, and a clear idea of the nature of their meeting, eventual relationship, setting and so on. In particular, I wanted these two characters to connect immediately, via their shared, sensual appreciation of the good things in life (e.g. food) despite finding themselves, at first, in a more austere, at times brutal, setting (hinted at by the chef, Arthur). “Pale Green ’66 T-bird” is a shortened extract from the beginning of the same draft novel featuring Samantha.

Mark Sanders lives in Broad Bay on the Otago Peninsula, Dunedin, in once-run-down-now- fixed cottage by the sea. He completed the Hagley Writers’ Institute course in Christchurch in 2015 and is a member of the South Island Writers Association. When not procrastinating, he writes mainly short fiction, although is currently working on a novel.

He navigated his way between drying sheets, towels and pillowslips to the compost bins.

The world turned slow motion as he hit the fallen clothes peg and rolled like a ship on a gentle sea. I saw the slow twist in his Gallipoli-knee and how his leg hinged backwards as he keeled over. Carrot peelings and potato eyes spewed from the bucket he carried, into the sun-warmed garden.

His great body settled into the soft earth with a deep sigh, a wooden dolly-peg succeeding where thousands of Turks had failed.

The ambulance driver came and said he was dead.

I ran into the musty familiarity of his bedroom and crept under his bed. Lying on my back, my hands danced over the rusty bedsprings, tracing the shape of Pops through his mattress. It smelt like the garden on a wet day.

I groped around until I found the cake tin. Pops kept cake and a few biscuits he’d snuck from the kitchen under his bed and I hid mouselike, pilfering pilfered cake, and I chewed stolen crumbs with a gnawing feeling growing in my guts.

At night I went to the garden where the imprint of his body lay, but he wasn’t there.

Instead, it was full of dead vegetables.

“Just Dead Vegetables” is a tribute to my grand-dad, my Pops, who passed away when I was four. It’s the story of a decorated WW2 vet who succumbed to a clothes peg while my friend and I watched him out the washhouse window. When I knew Pops he had Alzheimers Disease, which seemed to put us at a similar mental age and we had a great time together. I think this is a four-year-old’s love story.

Nicky Taylor is a writer, artist, mother and health promoter for an addiction service. She often writes about events that happen in her sphere of life, usually with altered details and characters. She’s been published in a handful of magazines in Aotearoa and Australia, as well as Specfic’s 2022 anthology Aftermath. She has won some awards but nothing supreme (yet!). Writing makes her as happy as Christmas! Nicky is currently working on a novel (yeah, right!) and exploring the genre of speculative fiction.

MASTER SHOT
Alice stretches out her hand to grab the care worker’s fingers. “Did you know old movies turn into vinegar?” she says. “The celluloid shrinks. They go brittle and smell—just like me.” Her cackle becomes a hacking cough.
OVER-THE-SHOULDER SHOT
The carer attempts to pull away.
TWO SHOT
“Come, sit,” Alice says, patting the stool beside her. “Have I ever shown you my reviews?”
FACING SHOT
The woman rolls her eyes and wrenches free.
WIDE SHOT
Scrapbooks, stacked up in piles, reach almost to the height of Alice’s seat.
TRACKING SHOT 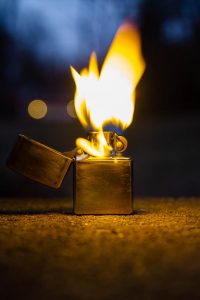 Her audience exits, shutting the door behind her.
Alice picks up her gold cigarette lighter and flicks it twice, but it doesn’t spark. She was never short of a light from a leading man. The tremor in her hands is worse today, but she lifts a book onto her lap.
CLOSE-UP SHOT
Alice flips through pages of reviews, handbills, and fading photographs. She pauses at a picture taken outside Hollywood’s Chinese Theatre, in which she wears a silver silk dress with a stole draped around her shoulders. Her makeup and coiffure are immaculate.
MEDIUM SHOT
Holding the lighter, Alice recalls how her heart leapt during the romantic scenes—the smell of the hero’s aftershave, the tingle of champagne on her tongue. She was on fire with a revolving door of suitors.

Frank’s photograph is next—his hair slicked into place, a wolfish look on his face. He was just one of many agents who syphoned off her royalties.
She rests the lighter on his picture and flicks it again.
EXTREME CLOSE UP
A flame dances. The pyre of praise proves perfect fuel.

Sue talks about her writing buddies at SIWA

As a beginning writer in 2013, the South Island Writers Association (SIWA) provided me with a supportive and encouraging environment to develop my talents. Each monthly meeting, there were two writing competitions, one prose and one poetry. I always aimed to produce an entry for each. The small financial prizes were not what drove me; I laboured for the invaluable feedback from the competition judges. I am still in touch with many of the friends I met at the meetings, and I belong to a critique group with two SIWA members. I’m sure I wouldn’t have persisted with my writing were it not for the encouragement I’ve received from these dear friends.

Sue Kingham writes flash fiction and short stories and is currently working on a historical trilogy. In 2021 she published a non-fiction book, Dyslexia. Wrestling with an Octopus. A number of her flash fictions have been published on Flash Frontier, and in 2018 her flash Swan Song won the North & South short-short story competition. She also writes magazine articles for latitude magazine and tutors at the School for Young Writers in Christchurch, New Zealand.

You can find more about SIWA and how to join on their Facebook page.

← Breach of All Size: Small stories on Ulysses, love and Venice Five Winners from Our First Ten Years →