the everrumble – a small novel in small forms
A poetic imagining of intense focus and sweeping ideas. 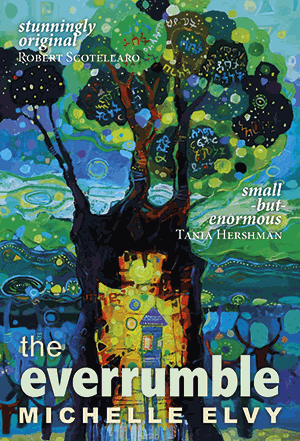 Zettie’s story is fluid and in motion, transcending geographies and time. She stops talking, at age seven, and starts to listen – to the worlds she finds in language and books, and to the people and places she encounters as she moves across continents. Her silence connects her to people, to nature and to the elemental world. Magical and beyond boundaries, this collection focuses on small fragments, taking Zettie, and the reader, inevitably to the place where human history began.

“A tour de force, Michelle Elvy’s the everrumble is a profound, poetic constellation of notes on the Earth’s ‘alive noises’, the hope that lives in the natural world. Zettie’s story – all her moments of evolving, her capacity to listen, and her gift of becoming all the sounds of the earth – affected me to the core.”

“Michelle Elvy’s acute prose wraps her silent heroine in ‘layers of remembered sound’, each linked fiction transmitting a luminous sense of the ‘loud world’ which vibrates her nerve-endings, and tracing her course through a life alert to strange frequencies of experience. the everrumble is a story of listening which makes sound ‘touch down’ under our scalps, taking our senses on a journey of ‘orchestral movement’.”

“Michelle Elvy’s the everrumble is an infused and accomplished accumulation of being. The language dances through the reader, elucidating concepts of time and sound and place. In Zettie, acutely conveyed, Elvy gives us a loving homage to our beleaguered planet.”

-Catherine McNamara, author of The Cartography of Others

“With a keen poetic sensibility, the everrumble draws the reader into worlds woven with fluidity through time and place. Here is a stunningly original novella crackling with an inner and outer expansive life. These linked stories are rife with an elegant gravitas and a unique approach to what is possible once those doors of perception are swung open and one can see, hear, and feel what awaits on the other side.”

-Robert Scotellaro, author of What We Know So Far and Bad Motel

“What do you hear when you choose to stop speaking? In this glorious and small-but-enormous book, we meet Zettie, born into a cacophonous world with a talent for perceiving sounds too quiet, too far and too deep for the rest of us – including the everrumble. Elvy paints a dreamy, powerful portrait of the life and travels of this word-collector and thinker who becomes celebrated as a visionary, not for seeing but listening. the everrumble will leave you filled with questions about what we miss by not paying attention, by filling up the silences.”

-Tania Hershman, author of Some Of Us Glow More Than Others

“…this is the best book I’ve read in a decade; a constellation of words from all over the world and a celebration of our planet’s energy and vibration. It’s short, just 103 pages, but it’s exactly right. The prose is exquisite, the observations both human and linked to all things, and the cacophony is wondrous yet familiar. A timeless world-song that unites what’s deep within us with the furthest horizon.” 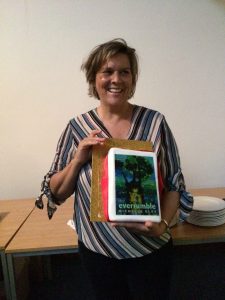 The book was presented on National Flash Fiction Day in New Zealand, with readings in Auckland, Christchurch, Dunedin, Northland, Wellington and Waikato.

It was officially launched by the publisher, Ad Hoc Fiction, in Bristol, England on June 29.

In New Zealand, it will be available at the 2019 NorthWrite Festival and also featured in Verb Festival (Wellington)‘s digital programme which will appear shortly after the live events on the festival’s website as further ways to delve into the discussions and ideas arising for the 2019 festival events.

Where to buy the everrumble

the everrumble can be purchased from Ad Hoc Fiction – coming to New Zealand book shops soon!