Then and now: Abha Iyengar

She could only imagine it now. Darjeeling. Pondicherry. Kolkatta. Europe. Images flashed in front of her eyes. How she had loved movement, leaving one place for another, but always with Rahul. Sitting behind Rahul on his bicycle as they careered down the mountain roads, her navy blue pleated school skirt flying, showing her brown legs and red boxer shorts. Then in college on his bike, her printed long skirt lifted above her knees, riding astride without a care in the world. They travelled all over the country, never settling down.

At Pondicherry she had conceived her son and given birth to him in Kolkatta. Finally, she had opted to settle down but it was not for her. They had lost him to a monkey bite! A monkey had come to their verandah in the night and bitten her son to death.

“Come, Shona,” Rahul had said to her, his eyes mirroring her sorrow, “we shall travel again.” How hard Rahul had tried to cheer her, taking her across Europe for a holiday. So many flights, so much movement. But with the stone of sorrow sunk in her centre, she was immobile. Soon after their return to Kolkatta, Rahul left her. “I have to move on,” he said, giving her a last forlorn look. She had not followed him out.

Within a year she lost all feeling in her legs. Now, sitting on a wheelchair, she flew over her past every day, circling her life. 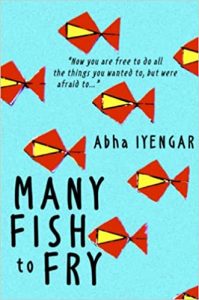 My love affair with the internet, writing and flash fiction began at the same time. When I was exploring international markets to send my work to (made possible by the internet), I found that there were several sites that asked for flash fiction submissions which could be sent through email. Email, in itself, was so liberating and free of cost. Some of these journals and webzines are defunct now, and some, like The Vestal Review, still thrive. But that was indeed the beginning of my love with flash fiction, and it continues like my beating heart.

By 2012, I was writing short stories and also submitting a great deal of flash with success. In 2013, I put it all together for my first flash collection titled Flash Bites. I was also working on my flash novella, with the fantastic Matt Potter of Pure Slush, who edited and published Many Fish to Fry  in 2014. It would not have happened but for him.

I am writing a novella-in-flash, which may go anywhere at the moment. I have ready a novelette-in-flash that is unpublished. It was written with Covid as the theme, and it is India-based. I have two novels that need to be reworked. I write poems and am experimenting with haibun. I edit fiction manuscripts and mentor creative writers. I have flash pieces forthcoming in Pure Slush and Brilliant Flash Fiction.

My literary career has enabled me to make many friends around the world who appreciate my work and my thought process. I have won awards and been invited to literary festivals. In 2021, I published another flash fiction collection titled The Full Platter. New writing for me involves increasingly the short-short form: flash fiction, micro fiction, prose poems and haibun.

The monk walked down the dark, deserted lane, after saying the last prayers for a departed soul. The old man’s wrinkled fingers had been like claws, holding on to the monk’s hands.

When he was very young, the sight of those taking their last breath would fill him with sorrow, and on his return to the monastery, he would sob quietly. His body would bend forward with grief as he suffered with those who lay dying. He noticed how they wanted to cling to life even as they gasped for breath.

As he walked, contemplating life and death, someone had sprung up from behind and held a knife at his throat. He had been startled. The question rose in his mind, what would anyone find on a monk? All he carried with him were his skills, his knowledge, and his wisdom.

The monk’s mastery of martial arts had never left him. He used this instinctively to make the attacker fall backwards. The monk turned around to look as a loud shriek rent the air. His attacker lay dying, having fallen on his own knife.

The attacker lay face up, with his eyes open to the night sky, bleeding from where the knife had entered his chest. The monk bent forward to close the man’s eyes. He sat down, next to the body of the man who had just attacked him and said a prayer. This was his second prayer for the night.

The monk picked up the dead body and walked backwards to the manhole. He lifted the cover, pushed the dead man’s body in, and put the lid back in place. There was nothing in the surroundings to show a man had died there. The blood on the road could be attributed to anything.

The monk had done what he needed to do. His mind was calm. His walk was upright. The white incandescent light that lit the street ahead revealed no mark on his body, no sorrow on his face.

But he was saying his third prayer of the night. 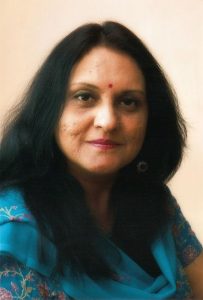 Abha Iyengar’s story, ‘A Travelling Life’, was published in the October 2012 ‘FLIGHT’ issue of Flash Frontier, an Adventure in Short Fiction. Since then, she has authored eight books, co-edited a short story anthology and curated and edited two anthologies of flash fiction.

Her flash fiction was among the winners at Flash Mob 2013, and has been shortlisted for the Brilliant Flash Fiction Competition 2017 and the Micro Madness Competition 2021.

Her flash piece ‘Fireworks’ won the Pratilipi Judges’ Choice award 2019. She published Flash Bites, a flash fiction collection in 2013. Her flash novella, Many Fish to Fry (2014), is part of the Flash Collection at Seaborne Library, University of Chester, UK.

← Five Winners from Our First Ten Years Then and now: Heather McQuillan →