Then and now: Eileen Merriman

A Chance of Snow

There’s a chance of snow. Kyle has never seen snow before. It seems irrelevant, up here on the hot-as-hell fourth floor of his university hostel. He reaches over to turn up his stereo, the thumping bass roaring into the vacuum in his chest. Raylene next door bangs on the wall. He can’t hear what she’s saying over the music and quite frankly he doesn’t care. He yells “Fuck off” even though she can’t hear that either and turns his attention to the task at hand. The pills lined up on his bed are blue and white and two-tone green-cream. So much for the Prozac — what a waste of time. He turns the stereo down, hears raucous laughter down the hall. Arseholes. He swallows some pills, chases them with gin, gags, swallows some more. He didn’t know it would take so long. The puking starts an hour later, lasts for three. He passes out at some point, wakes to see an odd grey-yellow light filling the room. Life is giving him another chance. He doesn’t want it. Acid bile and alcohol bubble up his throat as he lurches towards the window. There’s the snow after all, alabaster white under a china blue southern sky. He opens the window as far as it will go and swings his legs over the sill. He breathes in, the sharp air cutting into his lungs like a razor blade, then spreads his arms. Waits for a chance of snow.

At the time I was first published in Flash Frontier, I was writing a novel called ‘Red Sky in the Morning’, which I worked on throughout my fiction writing course at Creative Hub. This has subsequently been extensively rewritten and was released last year as ‘Double Helix’ (Penguin Random House). I first heard of flash fiction through a friend/writer, Nod Ghosh, who is an internationally recognised flash fiction writer. She encouraged me to submit to Flash Frontier. I was delighted when my piece was chosen and published. Over the years, I published several more pieces of flash (nationally and internationally) and was even placed second in the inaugural Bath Flash Fiction Award. It really helped hone my language, as every word counts in a flash fiction piece, and helped my novel writing immensely.

Currently I’m writing another young adult book, and reading through the final proof of the second book in my soon-to-be released Eternity Spiral duology. 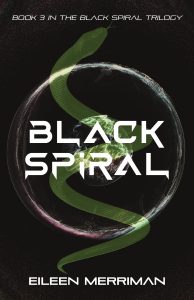 I’ve had eleven books published since my debut novel, Pieces of You, was published in 2017 –  three adult and eight young adult – and will be excited that my YA novel, Violet Black, is a finalist in this year’s NZ Children and Young Adult Book Awards. Two of my YA books have been translated into German and Turkish, and five (including my Black Spiral Trilogy) have been optioned for film/TV.

An excerpt from Violet Black

The world is white and bright and terrifying. My head is an over-ripe watermelon, about to burst. My eyes are stinging, and my skin burns.

My limbs are heavy, as though someone has poured molten lead into my veins. I can’t turn my head, can’t speak, can’t see beyond this white-white-white.

I’m dead, just like all the other kids this epidemic has taken away.

Hell is a bright light searing your retinae. Heaven is a myth.

I close my eyes. Wait for the reckoning.

Before I went into a coma, the world was mostly pretty orderly. Input = output. I guess you could say I was in homeostasis, a word our biology teacher uses a lot. He told us that homeostasis is the word to describe how elements like to be in equilibrium with each other, like if you put a glass of cold water outside on a hot day and it gradually warms up to air temperature. That’s me. I like to be in equilibrium.

I am so not in equilibrium right now.

When did it first happen? I’m not sure. Maybe when I was waking up after nearly dying of M-fever, and I couldn’t speak, but I was trying so hard to communicate and then… then…

I pushed. And something, someone, pushed back.

Her name is Violet. Violet, but she is sunshine-yellow, and I need to find her because I think she might be just like me.

Eileen Merriman’s first young adult novel, Pieces of You, was published in 2017, and was a finalist in the NZ Book Awards for Children and Young Adults and a Storylines Notable Book. Since then, a stream of novels for adults and young adults have followed. She has received huge critical praise, with one reviewer saying: ‘Merriman is an instinctive storyteller with an innate sense of timing.’

In addition to being a regular finalist in the NZ Book Awards for Children and Young Adults, Merriman was a finalist in the 2021 Ngaio Marsh Award for Best Crime Novel and Moonlight Sonata was longlisted for the Jann Medlicott Acorn Prize for Fiction 2020. Editions of some of her young adult novels have been released in Germany, Turkey and the UK and three have been optioned for film or TV, including the Black Spiral Trilogy.