Then and now: Heather McQuillan

Where Can the Children Laugh?

“We giggle because of the balloons in our bellies,” said the children and they giggled all the more as the air escaped their bodies and they propelled in jagged arcs across the room and out the open door. He grasped too late for the strings. Red welts scored across the palms of his hands as their sandaled feet, snake-striped by a long summer, skimmed across the roof of the house-next-door. Their laughter pealed out a callous carillon as they saw their childhood home from a new perspective and him so small in their world.

He last saw them lifting away into a bank of clouds filled with thunder as black as tea. The primary colours of their jumpers stood starkly out in contrast and made him think of geraniums and bananas and the sort of hyacinths that his mother would call sailor boys.

He suspects they might have stopped their giggling when the clouds wrapped them in a clammy embrace, the smirks wiped wet from their grubby faces.

He remembers how he’d trusted in his own father when he’d said, “If you eat too many bananas you’ll turn into a banana.” The children at school had mocked him with sniggers and snorts.

He thinks he sees a glimpse of buttercup yellow in the sky but it is gone. Just a card every now and then, a belated birthday or Christmas greeting when they remember.

He’s not laughing now either.

At the time I saw myself as a children’s writer but, following the earthquakes in Canterbury, I’d become overloaded in my teaching job and had no time for novels. I joined a poetry class with James Norcliffe as tutor. I complained to James that my poems kept turning into stories and he said, “Have you heard about flash fiction”. It was a pivotal moment. 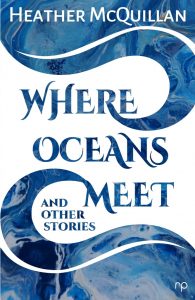 In 2016, I embarked on a Masters in Creative Writing with my thesis focussing on the flash fiction form. That year I won both the National Flash and Micro Madness competitions and was third place winner in the Sunday Star Times Short Story Awards. In 2019 my thesis project, Where Oceans Meet and other stories, was published by Reflex Press , UK. Flash pieces have also appeared in Best Small Fictions in 2017, 2019 and 2020. In 2018 I took on my current role as director of Write On School for Young Writers.

In 2021, I was the Children’s Writer in Residence at Otago University and was a finalist in the RNZ short stories competition and Literary Taxidermy.  I am back spending more time on my novels for young readers but still enjoy writing short stories and flash fiction. I have a novella in flash in fragments that keeps calling me back. I am not a big submitter but regularly submit to Flash Frontier. I love that it supports local writers and treasures our stories.

A Writer’s Guide to Dead Fish

Heather McQuillan is Director of Write On School for Young Writers in Christchurch. In 2016, her stories placed first in both the NZ National Flash Fiction Day and Micro Madness competitions. She has been published in Best Small Fictions 2017, 2019 and 2020. In 2021 Heather was a finalist in the RNZ Short Story and Literary Taxidermy competitions.

Heather also writes for children and in 2005 was the winner of the Tom Fitzgibbon Award. Three of her novels for young readers have been listed as Storylines Notable Books. Her collection of flash fiction Where Oceans Meet was published by Reflex Press in 2019.