The Ghost of My Father

The ghost of my father arrived at sundown. He was hunched over, carrying on his back a book so huge that at first I thought it was a slab of concrete. As he came nearer I could see in black gothic lettering Lexicon of Theology scrawled across the cover.

I’d been shooting rabbits from my chair on the porch and put down the gun as he approached. I rose to greet him but he climbed the steps and walked on past me.

He stopped on the deck, offloaded his burden and opened it. From the middle pages gods of every religion oozed out and swarmed around him. I cowered against the wall. Subtle and shaky memories of my childhood snaked unbidden into my mind. My father tore a limb off the wisteria growing along the railing and thrashed at the gods. They backed away. He tottered towards me like a child, offering the branch. I reached out.

Then I saw his hand; gnarled and claw-like, fingernails long and crusted with years of shame. I reached instead for the shotgun, took aim and fired. The book shattered into a thousand tiny pieces and the gods spiralled away towards the heavens, lighting the sky in a glorious display of colour. My father toppled down the steps and dissolved into the night.

In the end, freeing him was easy.

In 2012 I was finishing up a junior fantasy novel. I had never written flash fiction before and my first story in Flash Frontier, ‘The Ghost of my Father’, was also the first piece of flash I wrote. It arose out of a workshop where we were given a mystical piece of writing and instructed to take some of the symbolism from it and write a short piece using that symbolism. Even though I have written many pieces of flash since, ‘The Ghost of my Father’ is still my favourite. 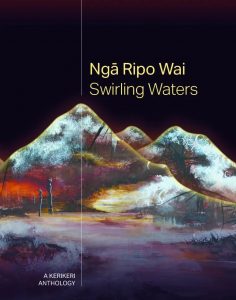 In theory I am writing two novels – a junior novel and a YA novel. The first draft of the junior novel is finished, but the YA one is taking some time to get my head around. I taught on the NorthTec Applied Writing Diploma for about seven years before leaving to set up a publishing business (Pavlova Press) with my sister in 2019. I also work as a private writing coach.

Escape from an English village

—a retelling of Augustus Earle’s meeting with the missionaries

We are on the final day of our trek from E. O. Racky to the Bay of Islands. The New Zealanders continue to carry our gear with good grace and good humour and in such a spritely manner that I can barely believe, given Shand and I have struggled with our own packs while traversing this inhospitable land. This morning, we entered a dense forest. The trees loom above us, tall and straight, their upper branches fused, creating a tightly woven canopy broken occasionally by splinters of blue. We scramble over protruding tree roots and hack through supplejacks that criss-cross our path like thick webs while our guides leap and bend like Cossack dancers. It wouldn’t surprise me to see a monstrous spider emerge out of the unbroken gloom, but I’m told there are no terrifying beasts in this land; I’m not entirely sure if that’s true or if they are playing games with us.

We emerge from the woods into the glare of daylight—in front of us an expanse of fern as far as the eye can see. The New Zealanders lead us down a narrow path just a foot wide and gouged deep from the pounding feet of a thousand journeys, more like a gutter than a road. We are promised Kiddy-Kiddy by nightfall and arrive just as the sun is setting. The incongruity of the tiny English village that appears after the savageness of the land we have just crossed doesn’t escape us. Wreaths of white smoke rise from the chimneys of neat weatherboard houses, and the glazed windows reflect the glow of the setting sun. We pass herds of fat cattle winding down the hills, lowing as they trudge towards the farmyard.

We fire our muskets to warn the inhabitants of our approach. New Zealand youths run out to greet us—boys of not more than fifteen with jackets reaching to their knees and done up to the throat with great black horn buttons, each head crammed into a Scotch bonnet.

The boys usher us into a house, all cleanliness and comfort, all order, silence and forced sociability. I present my letter of introduction to the grave-looking missionary, who takes it away to read in private. We are left standing in the entranceway, and I start to question why we stopped here at this house of cool reception. But the missionary returns and offers us tea. The spread laid out before us is reminiscent of all that an abundant farm and excellent grocer in England would supply; perhaps there is more to this gentleman than I give him credit for.

But I soon find that isn’t the case. He ignores us completely and calls aside every person who enters the house so they can look at and discuss the letter I provided. We are left to our own devices with the tea. What a way to receive a countryman! No smile, no enquiries after news, no touch of human sympathy. When he offers us a bed for the night, we refuse, although we do accept his offer of the missionary’s boat to convey us and our guides to the Bay of Islands. There is no moon, and rain and wind beat the sides of the crowded boat. The rock-strewn river threatens to capsize us at every turn, but I find I prefer this treacherous water than the artificial climate of the English village we have just escaped.

She taught on the NorthTec writing programme for seven years. Currently the treasurer and events coordinator for the NZ Society of Authors Northland Branch, Katharine is the key organiser for the annual Northwrite event. She is also the joint owner of Pavlova Press, an independent publishing company.