Then and now: Nod Ghosh

Henny loves Gray. They’re sitting on a park bench by the Heathcote, their toes rolling naked in the grass like huhu grubs ready to burst. Gray lights up a fag, and the river obliges them with a retaliation of coloured swirls. Henny only took the mushrooms to find a way into Gray’s anatomy. He wants him in that way. Then there’s the glue, and a little baggy.

Jason drives past, his windows wound down, a shaft of bass resonates out of the battered maroon Legacy. He’s shouting, “D’wanna come to Miff’s bach?”

Henny feels like his toes are splitting as they scratch the earth. His teeth feel like they are still in his head, but only just. He looks up at a cliff face on the other side of the road. There are tree stumps near the top, They’re spinning.

Miff’s bach is always cold. Always has howling gales ripping through the corrugated walls and cracks like spider webs in the windows. You feel the cold a lot more when it gets dark. Stars lie sprinkled in the corner of the sky, like crazy dots of festival light. Henny reaches over and touches Gray’s thigh, who pushes him off, spits out, “Gay bastard”, then he’s gone.

That’s when the sea rushes in. It’s higher than his head, fingers of fright force their way down his throat. One minute he’s fighting the terror, the next, Henny’s wondering if he ever left the river at all, and then…

In April 2013, I was drafting my first novel, sending poems, short stories and flash fiction out, in an attempt to get published. I wrote the occasional piece of creative non-fiction too, though I didn’t know that’s what it was called at the time. I came across flash fiction when attending the Hagley Writers’ Institute in Christchurch. One of the tutors, Frankie McMillan, was an expert in the short short form. She encouraged students to write flash and submit to competitions. 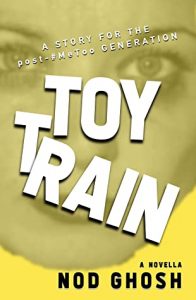 I’m illustrating a picture book I’ve written. I’m doing everything incorrectly. I’ve heard beginners shouldn’t illustrate their own work. I’ve written in rhyme. Every recommendation I’ve read states you should never write in rhyme. I’m told you should never plan the layout until you’re confident the writing is complete. Every time I open the file, I edit the piece a little more, and have to change the storyboarding.

When I tear myself away from the illustration programme on my iPad, I write flash fiction, mainly novellae-in-flash. Truth Serum Press has published The Crazed Wind, Filthy Sucre and Toy Train. Another novella-in-flash, Throw A Seven, is due to be published by Reflex Press later this year. There is a new novella and a further collection out on submission at the moment.

The terrible novel from 2013 was never published, though I did write three more after that. One received a manuscript assessment from the New Zealand Society of Authors. Nadine Rubin Nathan at High Spot Literary represents my longer work. She is seeking a home for that revamped novel, Paper Prison.

Crying in the Night

There are times Nina hears her mother weeping at night. Everyone should be asleep, Nina thinks including me. She pushes a needle through cloth, imagines her father at the door, watching, approving.

She snips a thread, holds still, listening for the sound again, but it’s gone.

Nina remembers a story her mother used to tell. It was one Nina’s grandfather had told Ma and Moya Auntie when they were little. He’d told it to them when they were frightened by sounds after dark. Though Nina never questioned this when she was small, she wonders why parents would tell their children something so terrifying.

Long ago, Grandfather used to say, when civets, mongoose and jackals roamed freely around the villages of the far, far south, animals made friends with children who couldn’t sleep. They’d wait until adults had closed doors, thinking the children were slumbering, and then they’d tap on the windows where the children waited.

Ma and Nina would make the animal noises over and over. Then they’d lie back laughing, only continuing the story when Nina’s mother had composed herself.

There was a boy called Biju, she’d say. His name meant jewel, and he was a precious child whom everyone loved. He had midnight black hair and eyes that sparkled like stars. Biju was the youngest of seven brothers and sisters, and he was but seven years old when this tale took place. Biju was a well-mannered boy, who respected his elders and helped people whenever he could. He was closest to Anuradha, the youngest of his sisters.

His parents loved Biju for his good deeds and sweet nature, but there was one thing about him they would’ve changed if they could.

Biju would not sleep. After hours of lullabies, stories and gentle backstroking, he’d close his eyes and fake sleep, so his mother, father or Anuradha would creep away to their chores or their own bed.

The night animals came when the elders weren’t listening.

When they tapped on his window, Biju would be ready, kurta over his head, chappals on his feet. He’d leap out to join his animal friends. They’d run to the jungle, jump into the river, swim its entire length and back, fly on the backs of night birds to the tops of mountains, and then return to the outskirts of the villages to climb the highest rosewood trees and look down on the sleeping world.

Biju would feast with the night animals, his belly so full of fruit and seed he could eat nought but a tiny morsel on his return.

This continued until the child’s eyelids grew thick for want of sleep. And still, the cry of the night creatures lured Biju from his bed.

There was a jackal, said to be the king of kings amongst their kind. He was known by the stout horn that sprouted from the middle of his forehead.

At this point, Nina would interrupt her mother.

“But Ma, jackals don’t have horns!”

The king, Ma continued, had heard about this boy. It was said he believed the child must be gifted with special powers, since he existed in both the world of men and the realm of night animals. The animals whispered amongst themselves that the king sought Biju as he wanted him to be his heir. The jackal king had no sons or daughters and it was said would take an heir from a different world.

One night, a sharp tap came on Biju’s window, followed by a cry that would have woken the dead, had they been listening.

Biju turned to look at Anuradha with a heavy heart. He knew who had come for him. And he knew he wanted to go. His eyelids were so thick from lack of sleep he could barely make out the shapes of his siblings under their blankets in the faint moonlight. With one silent wave, he leapt out and joined the king.

The following day, Ma continued, the whole village gathered outside Biju’s home, where the boy’s family wept because their jewel-child was missing.

“How can we help?” the villagers asked. “Shall we organise search parties to comb the jungle?”

They looked for seven days and nights, but not a trace of the boy was found.

At this point in the story, Ma would always pause. Nina would pout and say, “It can’t end like that!” She knew very well that it didn’t finish that way, but she still said it every time, just as Ma had said it to Grandfather years earlier.

Years later, when Anuradha was grown up with children of her own, she’d hear a tapping on the windows after her children had been put to bed. She’d rush outside to see who was there, but find no one. Sometimes she’d hear a faint eeyoo-wooooooooooo in the distance, and at other times, shed hear nothing.

One night, Anuradha lay waiting beside her youngest child, who was fast asleep. The night animals should leave sleeping children alone, she thought, and yet here was the tap-tap-tapping on the window. She crept out from under the mosquito net, tiptoed to the window.

Eeyoo-wooooooooooo! The call was faint at first.

In the moonlight, she saw a creature, half-man, half-jackal, with a horn in the centre of his head and eyes that shone like stars.

“Biju?” she cried out. But when she looked again, the hybrid man-animal had disappeared.

As a child, Nina had found the story intoxicating, because of its mystery. Now she cries in the night at the cruelty of it. 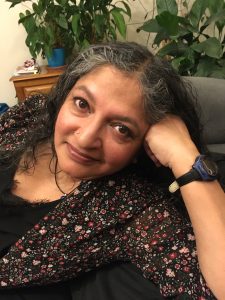