The Beginnings of America

The ice age receded. The land rebounded, higher and better than before. With our crew of cut-throats and cartographers, we set off to discover America.

When we came off the boat we made straight for the nearest Walmart to check our makeup and hair.

The assistants bowed and scraped, their feathers waving. The goods on the racks waited silently for us. We would need them as we moved across the countryside, establishing the Rust Belt, the Sun Belt, the mortgage belt. The assistants moved around us, lulling us with their chants. We established condominiums in the turkey woodlands. Various persons departed in their Conestogas, vanishing from view as they entered shallow depressions, becoming visible – though foreshortened – as they crawled up and over mountains.

We found ample resources conveniently close to a system of navigable rivers that ran generally south by east. Great herds roamed the land: the buffalo, the passenger pigeon, the investment banker. Each fell before our guns. Upon this rock, upon on this butte, upon this mesa I will build my church.

So much to celebrate. We retired to our ships at night, and in the morning, praised the Lord for our safe deliverance. Our assistants, unused to our ways, watched from the edge of the forest. In the morning, when we called for them, we found that they had gone before us. In years to come, we would find traces of them: discarded arrows, campfires, bones, always pointing west.

You can hear Tim reading this story at the Festival of Flash Humour reading, here.

When my story ‘The Beginnings of America’ was published in the first issue of Flash Frontier, it was a return to short-short fiction for me. I had several short-shorts (as they were known then) included in the Graeme Lay/Stephen Stratford series of 500-word story anthologies, but in the early 2010s I was concentrating on writing and editing poetry – including some prose poems. As I said in a previous interview:

I like the challenge of writing interesting stories in a short space; I like seeing what elements of plot I can make function within a tight word limit; and I enjoy the freedom to experiment, to try out a technique or subject matter I might not normally tackle. If it works: great. If it doesn’t: no great loss in terms of time taken, and I’ve learned something.

So when Flash Frontier came along, I was keen to try the challenge of writing stories in an even tighter space. 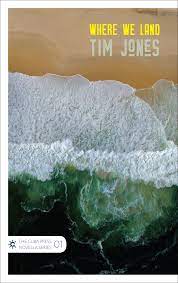 Between 2017 and 2021, through & around illness, a death in the family, lots of climate campaigning and some climate fiction, I was occupied with writing a novel – which is (spoiler!) a slog of a job. Since I completed the manuscript, I have been absolutely loving writing poetry again – poetry was my first love as a writer – and I’m also working on a sequel to Where We Land, my climate fiction novella published by The Cuba Press in 2019.

We fight the sea to a standstill, accept the tide’s
offer of negotiations.

Asymmetrical warfare: our fixed positions,
the sea changing its demands twice a day,

but at last we agree: blue lines, green lines,
and in between the contestable beach.

We return to our constituencies
bearing pieces of paper:

ours waving bravely in the airport wind,
the sea’s dissolving even as it speaks. 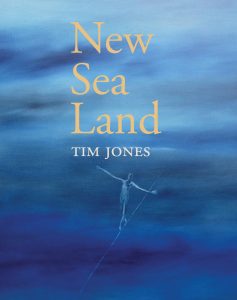 Tim Jones is a poet, author and anthologist who lives in Wellington. He was awarded the New Zealand Society of Authors Te Puni Kaituhi O Aotearoa Janet Frame Memorial Award for Literature in 2010.

He edited the 2021 New Zealand Poetry Society anthology Kissing a Ghost and will also be editing the 2022 NZPS anthology.

← Then and now: Nod Ghosh Celebrating Ten Years: Writers Then and Now →